Boeing (BA) reported better-than-expected first quarter results before the opening bell today. Revenue and adjusted earnings for the quarter topped analyst consensus. Adjusted earnings shot up 68% to $3.64 per share, while revenue came in at $23.38 billion, up 6% compared to prior year period.

The aircraft maker saw solid growth across all its segments during the quarter. Profits jumped 57% to $2.47 billion primarily due to improved airplane deliveries to its customers and $200 million savings due to the recent income tax reforms. Backlogs improved $11 billion to $486 billion at the end of quarter, compared to the previous quarter.

Commercial Airplanes segment, which brings in a lion’s share of revenues, hogged the limelight during the quarter. Operating profit saw 73% growth, primarily due to productivity improvements resulting in more deliveries. Order backlogs remained healthy at 5,800 airplanes worth $415 billion. The company expects to ramp up its production to deliver 900 planes per year by 2020. This is expected to bump up profits in the upcoming quarters. 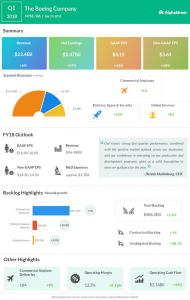 Defense segment earnings grew 18% and backlogs decreased $13 billion to $50 billion compared to the prior year. KC-46 tanker program saw progress in the quarter completing the on-load certification testing. The tanker program has hurt the company due to technical issues and bloated costs. Global services’ division profits rose modestly to 3% on $3.9 billion sales, aided by the commercial services.