Constellation Brands looks to cannabis for a high, ups stake in Canopy

Wine and beer maker Constellation Brands (STZ) has been expanding its business in a spirited manner in the past few years, recording above-consensus earnings in most of the recent quarters. After forging a strategic partnership in the medical marijuana industry last year, the company is jacking up investment in the offbeat sector.

Constellation, the manufacturer of popular brands like Corona beer and Svedka vodka, this week raised its stake in Canada-based Canopy Growth Corp. (CGC), the largest medical marijuana company in the world. It is speculated that the company is betting on the marijuana movement in the US, which is currently in a budding stage. It is expected that regulators will relax the rules and make the sale of drinkable cannabis legal in US markets in the near future.

Constellation Brands seems to be betting on the marijuana movement in the US, which is currently in a budding stage

The $4-billion new investment, which lifts Constellation’s shareholding in Canopy from about 10% to 38%, will take the latter’s marijuana-based beverages and sleep aids to more markets. As per the terms of the deal, the company has an option to raise its stake in Canopy to 50% by exercising about 140 million of new warrants over the next three years. It can also nominate four directors to the board of directors of Canopy.

The New York-based brewer on Wednesday announced a deal to acquire 104.5 million shares of Canopy for C$48.6 a share, which represents a 51.2% premium to the last closing price. The transaction is expected to add to Constellation’s earnings by 2021.

Constellation became the first beverage company in the US to venture into the cannabis business when it bought the initial stake for $191 million less than a year ago. Considering the restrictions in the US on the sale of such products, for now, the company will be focusing on Canada and other overseas markets.

Shares of Constellation jumped about 4% soon after the market opened Wednesday, recovering from the losses suffered in premarket trading. The stock has gained about 12% over the past 12 months. Meanwhile, Canopy Growth fell 8% in the New York Stock Exchange in early trading, paring the sharp growth seen in the premarket. 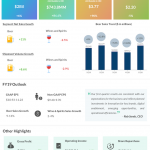