Agreed these are troubling times for the retail segment. But that doesn’t mean investors would take stocks for granted if they publish better-than-expected results. In fact, investors would be keener to find out the health of the retailer to make sure they can sustain such results, especially with the Amazon threat looming right above them.

Costco probably had a taste of this trading attitude yesterday after it reported second-quarter results. Though the company managed to maintain its positive growth momentum and reported 36% increase in its profit to $701 million in the holiday quarter, the stock fell as much as 2% in premarket trading today, before closing a bit higher in red.

For most of the investors, an earnings beat helped by one-time tax benefits was not pleasing enough. The tax benefit had lifted the earnings per share by $0.17. Trump won’t be there to help the next time! Declining gross margin proved to be yet another dark spot in the earnings report, given inflation.

Perhaps what worried investors the most were concerns about how the warehouse retailer plans to improve subscription rate without reducing the prices of its high-end articles. Membership renewal rate saw only a modest 1% improvement over the sequential quarter, though subscription revenue jumped about 13% driven by fee upticks in the US and Canada.

Meanwhile, total revenue during the second quarter jumped 11% to $33 billion, as comparable sales grew 8.4% and its e-commerce sales grew 28.5%. Also, Costco’s habit of not spending on advertising helps it save almost 2% of its budget each year.

It may be safely said that Walmart’s decision to close 63 of its Sam’s Club warehouses across the US will benefit Costco in the coming quarters. Closure of the membership-only rival warehouse chain is estimated to boost Costco’s sales by $1.8 billion. 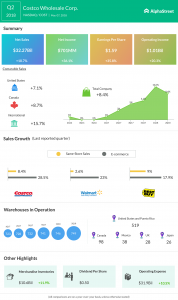