The membership-based warehouse operator BJ Wholesale Club, which competes with the likes of Costco (COST) and Sam’s Club, is all set to rejoin the public market. The company took the first step towards filing an IPO on Thursday and decided to sell shares on the New York Stock Exchange under the ticker symbol BJ. The filing listed a proposed offering of $100 million.

The warehouse club, currently owned by private equity firms Leonard Green and CVC Partners, is quite similar to Costco. Both are membership-based stores and sell almost everything right from the grocery, furniture to clothing. The two even have a similar generous return policy on items. The competition between the two is well documented, but in reality, both the companies will have to fight against the growing competition from Amazon (AMZN) and Walmart (WMT).

Considering the successful IPOs of Spotify (SPOT) and Dropbox (DBX) this year, it appears to be the right time for BJ’s to enter the strong market and test their luck. Not selling itself to Amazon or Walmart now seems to be a right move, as the company can actually cash in more through an IPO. The company is yet to reveal how many shares it plans to sell and at what price.

BJ’s that went private in 2011 currently has 215 warehouse clubs. Of late, the company has been performing well under the leadership of CEO Chris Baldwin, who took the charge in 2016. There was a steady growth in profitability and the membership-renewal rates have also been growing. 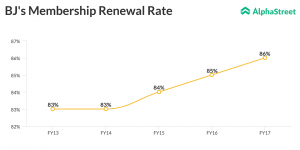 Net income generated during the fiscal year 2017 came in at $50 million on total revenue of $12.8 billion. The only worrying factor in 2017 has been the company’s same-store sales that declined narrowly. 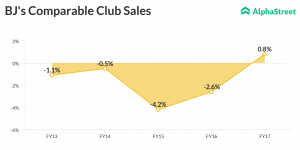 Considering the rapid shift in the retail landscape where customers are more inclined towards paying online, we’ll have to wait and see what happens with BJ’s IPO and how it tackles the competition from retail giants and perform in the future.