Chipmaker Intel (INTC) reported its first-quarter results after the closing bell, with earnings and sales topping analyst estimates. The company saw 9% growth in its revenue to $16.1 billion and 32% growth in adjusted EPS to $0.87 respectively. The first quarter results were driven by strong growth in data-centric business and improved operating margins. The company’s strategy to move from legacy PC-based business to data-centric side seems to be bearing fruit, with the latter contributing nearly 50% to Intel’s top-line for the first time.

Intel’s bread-and-butter Client Computing Group (CCG) revenues rose 3% to $8.2 billion. On the platform side, notebook volumes grew 4%, while desktop volumes dropped 6%. According to Gartner, PC shipments decreased 1.4% in the quarter. The chipmaker also started shipping 10-nanometer chips in lower numbers, but expects mass production to happen only in 2019. It had earlier stated that it would ramp up production in the second half of the year. 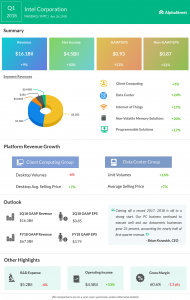 Data Center Group (DCG) raked in $5.2 billion, increasing 24% over prior-year period, backed by a 16% increase in unit volumes. On the autonomous driving front, Mobileye started running autonomous test vehicles in Israel and plans to extend it to other parts of the world.

Intel has raised its guidance for 2018 based on the strong first quarter results. Revenue is expected to be $67.5 billion, up $2.5 billion from earlier outlook. On an adjusted basis, EPS is projected to come at $3.85. For the second quarter, the chipmaker expects $16.3 billion as revenue and adjusted EPS of $0.85.

Shares of Intel rose 7% in extended trading hours and have increased 15% this year.