Farming equipment maker Deere & Company (DE) missed on its earnings consensus estimate for the second quarter, while revenue climbed 29%, remaining in line with expectations. Net income surged 50% year-over-year to $1.208 billion, while reported earnings per share came in at $3.67, up 47%. On an adjusted basis, the company reported earnings of $3.14 per share.

Sales for the second quarter was helped by strength in the company’s key markets driving revenue up by 29% to $10.72 billion. The sales improvement was also aided by improved worldwide market conditions and from the positive response to the company’s product line.

“Farm machinery sales in both North and South America are making solid gains and construction equipment sales are continuing to move sharply higher. During the quarter, Deere made significant progress working with its suppliers to ramp up production and ensure that products reach customers in a timely manner,” said Samuel Allen, CEO.

The company’s largest segment Agriculture & Turf sales surged 22% to $7.04 billion for the second quarter. Deere is expecting the worldwide sale for this segment to increase by about 14% for fiscal 2018, while in the US and Canada, industry sales for agricultural equipment are forecast to be up 10% for 2018. The Moline, Illinois-based company had earlier cited stronger replacement demand for agriculture equipment, particularly in the U.S. and Canada.

Construction & Forestry segment posted the highest growth among the company’s segments with an 84% jump in sales year-over-year to $2.69 billion. The company expects worldwide sales to be up 83% for fiscal 2018. The acquisition of Wirtgen is expected to add about 56% to the division’s sales for the year.

For Financial Services, revenue increased double digits by 11% to $795 million, while net income grew marginally by 0.5% to $104 million. The results were driven by lower provision for credit losses, offset by a less-favorable financing spread. For fiscal 2018, the company expects net income for this unit to come in at $800 million, including a provisional income tax benefit of $229 million related to the tax reform. 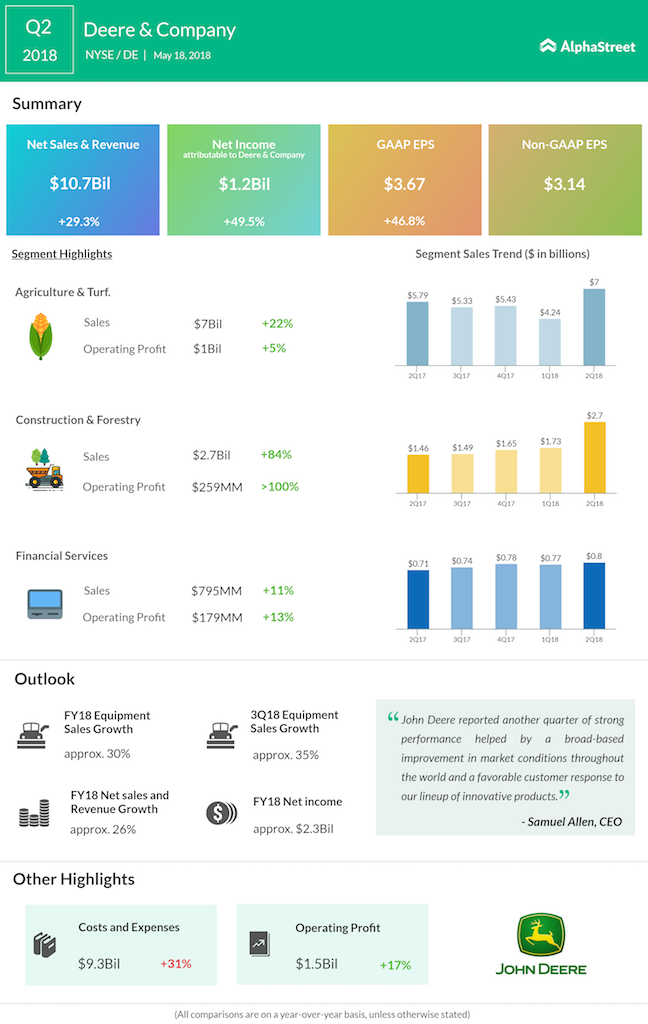 Deere also reported in the release that it is facing higher raw material and freight costs which the company is addressing through structural cost reduction and future pricing actions.

Deere expects net sales and revenues to climb by about 26% for fiscal 2018 with net income attributable to the company expected to reach about $2.3 billion. The profit expectation includes $803 million of provisional income tax expense related to the tax reform. Adjusted net income attributable to the company, excluding the provisional income tax adjustments associated with tax reform is expected to be about $3.1 billion.

Though the stock has increased 19% over the past one year, it has had a wavering run in 2018 declining 6% since January 2018. Post the earnings announcement, the stock declined by about 1% at 7:30 AM ET during pre-market trading.