In its latest report, Delta Air Lines (DAL) reported that it flew a record 17.7 million passengers — both on mainline and Delta Connection flights. In the three months from April to June — a peak season for airliners — Delta said it flew nearly 50 million passengers. Closely trailing Delta was United Airlines (UAL) that flew 15.2 million passengers in June, according to Chicago Business Journal.

“We’ve made a commitment to our customers to be a reliability leader, delivering a safe, on-time product and the 80,000 employees of Delta are doing just that. We’re seeing customers fly Delta in record numbers this summer and it’s a resounding testament to the hard work and focus of our employees,” said Dave Holtz, Delta’s SVP — Operations and Customer Center. 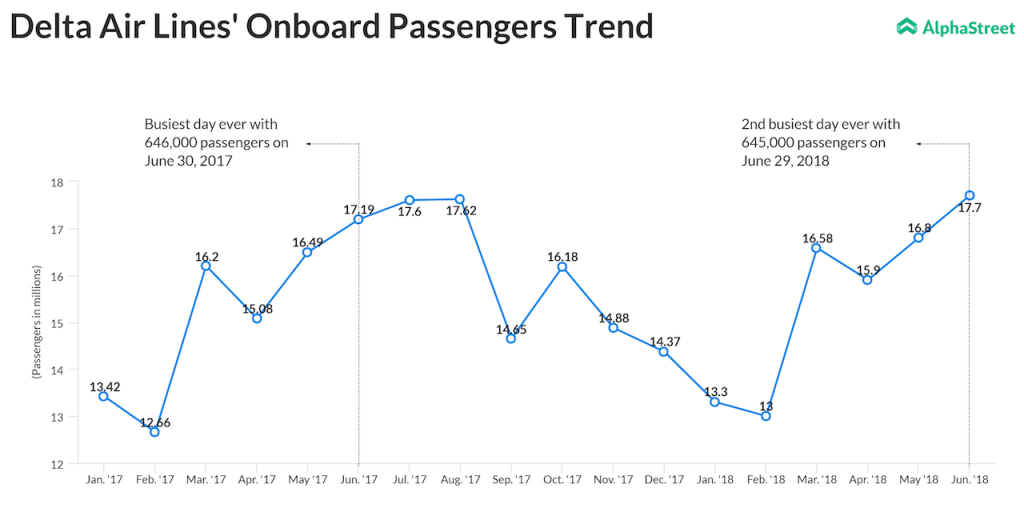 A forecast issued by trade group Airlines for America (A4A) revealed that nearly 246.1 million passengers are expected to travel with US airlines between June to August.

While other airline companies are cramming more seats into flights to increase sales, Delta recently announced that it is reducing the number of seats in the Economy Class of its Boeing 777-200ER fleet for better passenger comfort. The seats will be made larger, which Delta expects to spark a passenger preference change in its favor.

Despite an increase in the number of travelers, the airline industry is hit by the rising fuel costs. The fuel cost are up almost 60% compared to the prior year and airline companies are under immense pressure to prove to investors that they can achieve profitability despite this headwind.