Dick’s Sporting Goods (DKS) topped analysts’ expectations on its earnings number for the second quarter of 2018 but missed the mark on sales, sending shares crashing by nearly 12% during pre-market hours and the stock continued to trade in the negative territory after the market opened.

Net sales grew 1% to $2.18 billion versus the prior-year period. Comparable sales, adjusted for calendar shifts, dropped 4%. Excluding the shifts, the comp sales decline was 1.9%. Sales were hurt by declines in Under Armour sales due to changes in their distribution strategy. The company remains optimistic that sales will gain strength going forward as the challenges slowly start to dissipate.

E-commerce sales increased 12% during the quarter and comprised around 11% of total sales. Inventory decreased 6.4% at the end of Q2 2018 compared to last year. 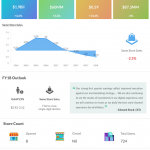