Meanwhile, same-store sales of the Pennsylvania-based company were lower by 2% compared to last year, as predicted by market watchers. After the news, Dick’s shares lost more than 4% in pre-market trading today. 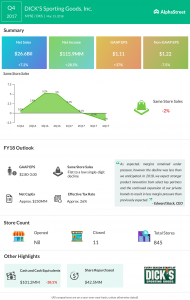 Profit advanced 37% to $1.11 per share, while sales increased to $2.7 billion helped by a broad-based upturn in brand performance. Adjusted earnings came in at $1.22 per share, and surpassed expectations. In a sign that the ongoing efforts to enhance the digital platform are bearing fruit, e-Commerce sales grew about 9% in the most recent quarter.

The data shows that Dick’s financial performance was not affected by its decision to curb the firearm sales to persons aged below 21 years. The initiative came earlier this month when the company joined other retailers in the campaign against the misuse of firearms.

Same-store sales were lower by 2% compared to last year, in line with expectations

Dick’s relocated one Sporting Goods store and shut down three in the recently ended quarter. In addition, four Golf Galaxy stores were also closed. The BoD announced a cash dividend of $0.225/share, to be paid on March 30.

The company is looking for EPS between $2.80 and $3.00 for the current fiscal year when share repurchases are expected to entirely offset dilution. The outlook for same-store sales is flat to a low single-digit percentage drop.