Diet Coke brings fizz back to Coca-Cola in Q1

Unit volumes improved 3% during the quarter led by coffee and tea (5%) as well as sparkling drinks (4%). Organic revenues saw 5% improvement aided by growth in concentrates and better price/mix. As expected, GAAP revenues were down 16% due to the refranchising activities in North America. Operating margins on a GAAP basis improved 220 basis points to 23.75%, while adjusted margins came in at 30.65%, up 600 basis points.

As customers are shifting towards healthier options, Coca-Cola and its peers had witnessed their soda sales dwindling over the years. It’s worth noting that sugary soft drinks have been contributing a lion’s share to the beverage giant. The company saw the transition happening amongst consumers and responded to it immediately. In January, it launched Diet Coke with four new flavors. The new product came in with brand-new packaging, which was more appealing to millennials. Diet Coke saw volume growth in North America for the first time after a lull of nearly 8 years. 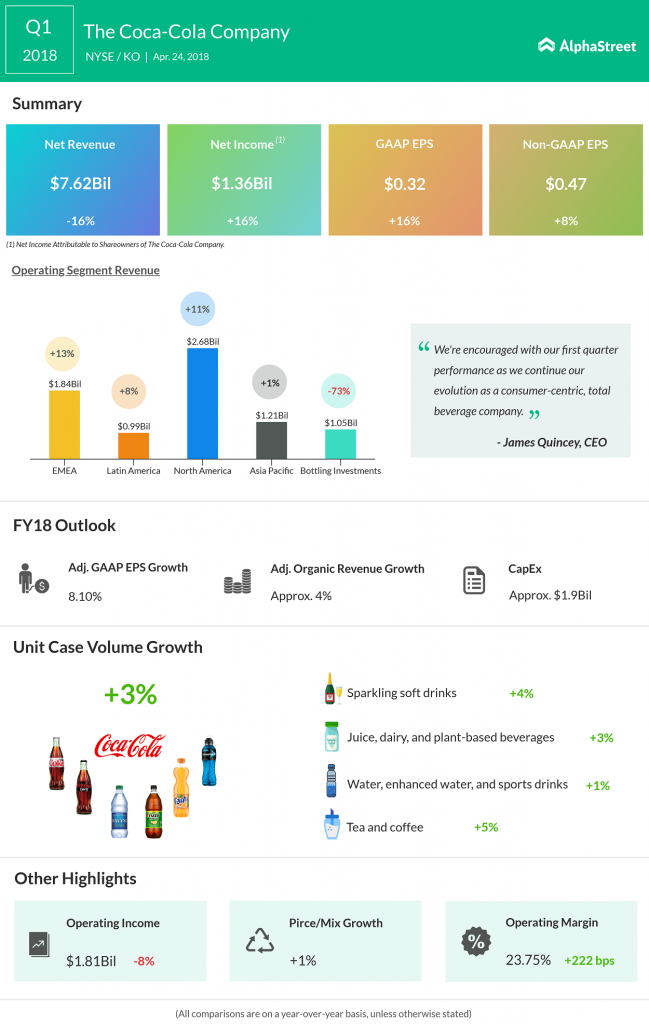 Last year, the company launched Coca-Cola Zero Sugar, which has been selling well for the past two quarters. In North America, the beverage giant’s biggest market, Coke Zero Sugar posted double-digit growth in the quarter. Product revamp done by the company in line with customer expectations seem to be bearing fruit. The world’s largest beverage company said it on the right path to achieve its full year outlook.

The company also has been diversifying its portfolio more attuned to the taste of consumers. In North America, it has posted double-digit growth in water brands Dasani and smartwater. During the quarter, Coke launched Fuze Tea in Europe, which was already available in other parts of the world. Coke is looking to acquire new brands, which would augur well in the long-term.