Just two weeks after closing the HelloSign deal, Dropbox (NASDAQ: DBX) is reporting its fourth quarter results on February 21, after the bell. The collaboration platform listed on the stock market in March and the stock has soared 24% since the IPO. In 2019, shares are up 27% post the HelloSign acquisition.

Analysts are expecting Dropbox Q4 earnings to come in at $0.08 on revenue of $370 million. On a sequential basis, EPS is forecasted to decrease 27% while the top line is about to witness a 3% lift. In the Q3 period, Dropbox reported better-than-expected results due to the steady growth in the paid subscribers and average revenue per user (ARPU). For the fourth quarter, Wall Street would be looking at the growth trend of two key metrics of the sharing platform: paying users and ARPU. 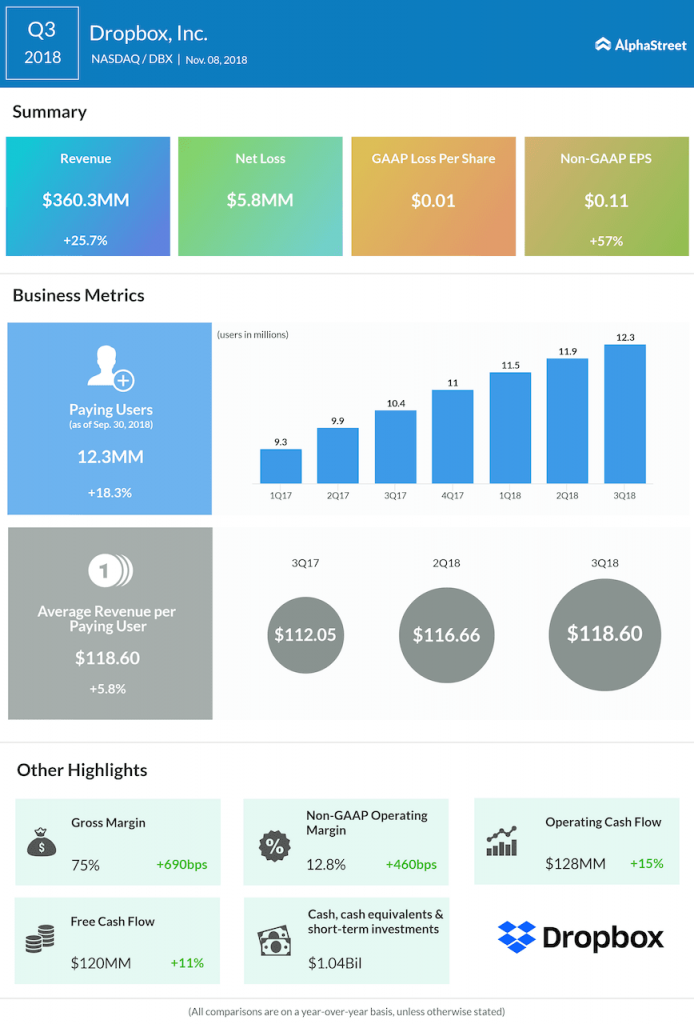 It’s worth noting that Dropbox generates 90% of revenue via self-service channels. Hence, analysts would be eager to see how the company is able to convert a large number of registered users to a paid user, which would result in higher ARPUs. Another important aspect would be the company’s ability to upgrade existing paid subscribers from lower-tier plans to higher-tier ones.

Related: Egnyte: The Dropbox-rival that is backed by Google

Last month, Dropbox unveiled its plans to acquire HelloSign for $230 million in an all-cash deal. This deal would mark its foray into the enterprise market which means the firm would be competing with the likes of Adobe (ADBE) and DocuSign (DOCU). HelloSign deal would help Dropbox to provide workflow, e-signature and document automation to its existing customers. Both the firms can cross-sell their services to the subscribers which would result in improved profitability.

The deal is touted to be the largest purchase of the collaboration platform since its launch in 2007. Investors would be expecting more commentary from the management about the deal synergies and how it would help the firm to grow its customer base and top line. HelloSign acquisition would help the firm to tackle competition from its rivals Box (BOX), Google Drive (GOOG), Microsoft (MSFT), and Amazon (AMZN).

You May Also Like: DocuSign Q3 2019 Earnings Call Transcript

Box is scheduled to report its fourth quarter results on February 27 after the bell. In the Q3 period, the file-sharing firm topped estimates and raised its full-year outlook, resulting in the stock surging 3% post the announcement. Goldman Sachs initiated Box coverage earlier this month with a buy rating and expects the stock to touch $31, which is an increase of 30% from the current stock price level of $24.

Dropbox has set a solid foundation and had started 2019 on a good note. Now it has to make inroads into the enterprise market taking on the biggies and broadening its customer base. It also needs to keep a tab on expenses and make sure its margins are intact to lift growth and improve earnings in the near future.