Box Inc’s (NYSE: BOX) third quarter 2019 results beat analysts’ views. The company posted a loss of 6 cents per share on revenues of $155.9 million. Analysts expected the cloud technology company to post a loss of 7 cents per share and revenue in the range of $154-155 million. The stock was up about 3% during the extended trading hours. 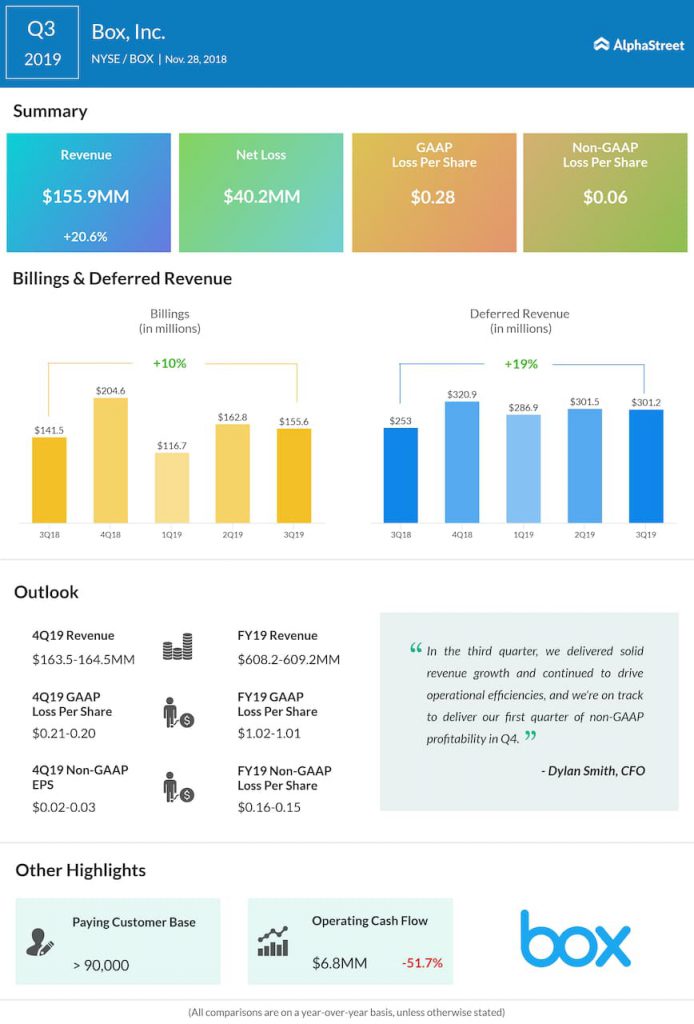 The 21% revenue growth in the quarter was driven by customer retention and customer expansion. GAAP net loss for the quarter narrowed to 28 cents per share from 32 cents loss per share reported in the prior-year quarter. Paying customers grew to more than 90,000 from 87,000 at the end of second quarter.

Free cash flow in Q3 was negative $4.1 million, compared to positive $6.3 million in the year-ago quarter. This result was driven by the timing of cash outflows paid in Q3 2019 that were originally anticipated to be paid in Q4 2019. Box expects to achieve positive free cash flow for the fourth quarter and FY19.

“Our solution selling strategy continues to gain momentum with strong attach rates for add-on products and large deal growth in the third quarter. With more than 90,000 customers, including BBVA Compass, National Bank of Canada, and Shiseido Company, Box continues to expand its role as a strategic technology partner to power digital transformation for enterprises,” said CEO Aaron Levie.

Box’s rival Dropbox (DBX) reported its third quarter 2018 results earlier this month and the company beat both bottom and topline estimates. Dropbox’s paying users and ARPU increased to 12.3 million and $118.60 respectively from 10.4 million and $112.05 in the prior year quarter.