Cloud storage company Dropbox (DBX) in its maiden quarterly earnings report, topped revenue and earnings estimates for the first quarter. Revenue came in at $316.3 million, higher than analyst expectation of $309 million, while adjusted earnings were $0.08 per share, compared to the consensus estimate of $0.04 per share.

Revenue jumped 27.5% driven by increased paid user growth and higher adoption of premium plans. In the quarter, Dropbox had announced business relationships with Salesforce (CRM) and Google (GOOGL), which the company expects to act as a tailwind in revenue growth going forward.

“Growth in paying users and increased adoption of premium plans helped drive first quarter revenue of $316 million, up 28% year-over-year. We continued to add value to our platform with new product features, and enhanced our ecosystem through partnerships with Salesforce and Google”, said Drew Houston, CEO.

Dropbox revealed that its paid users increased 23.6% year-over-year to 11.5 million, while average revenue per paying user grew 3.1% to $114.30. The company has been seeing steady growth in its registered user growth since inception and currently has over 500 million users across 180 countries. 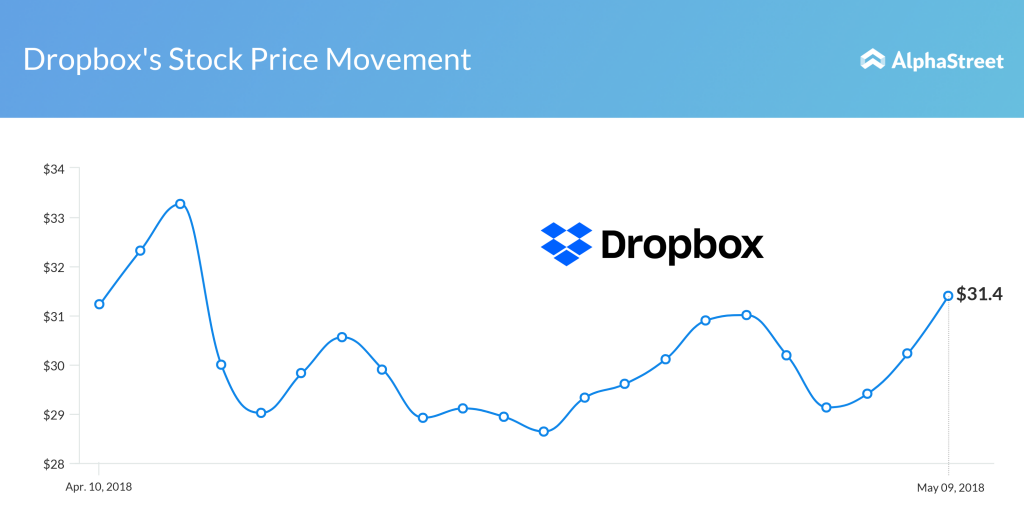 The company’s stock has had a seesaw trend since IPO and could not bring in the momentum expected despite the results beating analyst expectations. Post the earnings release, the stock was in green picking up marginally by about 1%.