Earnings calendar for the week of May 3

Leading stock indexes retreated after gaining mid-week when Wall Street biggies like Apple and Amazon reported impressive quarterly numbers. The Dow Jones Industrial Average was down 190 early Friday, while the S&P 500 index shed 23 points since the last close. Meanwhile, weekly jobless claims dropped to about 553,000 – the lowest since the start of the pandemic – extending the recent improvement.

IBM clinched a deal to acquire Turbonomic, a Boston-based provider of application resource management software, on the heels of adding enterprise observability platform Instana to its fold in a similar deal.

The technology sector dominated the earnings scene and the spotlight was on FAANG components Alphabet, Facebook, Apple and Amazon, which reported on Tuesday, Wednesday and Thursday. The week started on a high note with Tesla‘s record-breaking first-quarter results and bullish outlook on production and delivery.

Boing brought some relief to shareholders on Wednesday by posting a narrower first-quarter loss and better-than-expected revenues. It was joined by chipmaker Qualcomm and Ford Motor. The next day, Twitter reported double-digit growth in ad revenue and earnings, which topped expectations for the first time in four quarters.

The other major companies that reported on Thursday include McDonald’s and Mastercard. ExxonMobil posted positive results on Friday amid continuing improvement in its upstream business. After the hectic week, the market is headed to a relatively soft phase in terms of events.

Quarterly announcements of video game publisher Activision Blizzard and healthcare firms CVS Health and Pfizer are among the important events expected early next week. Lyft and Xilinx are also preparing to unveil their latest quarterly numbers on May 4. On May 5, investors will be closely following the earnings release of General Motors, which last year reported its first quarterly loss in more than a decade.

The other important events scheduled for the day are the first-quarter earnings of PayPal. Monster Beverages, Expedia Group, Moderna, and Roku will be reporting on May 6. 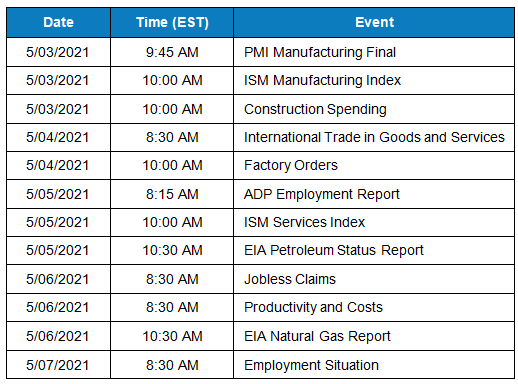