Earnings jump 40% for KeyCorp as stock rallies to level losses

Bank holding company KeyCorp (KEY) reported an increase in first-quarter earnings, aided by the higher interest rates and benefits from recent investments. The bottom line performance was in line with Street expectations.

Following the announcement, in Thursday’s early trading hours, KeyCorp shares pared some the losses they suffered over the past one month.

Earnings from continuing operations moved up 40% annually to $0.38 per share during the three-month period, matching estimates. While the latest figure is the highest the company registered in recent years, last year’s results were negatively impacted by merger-related charges. 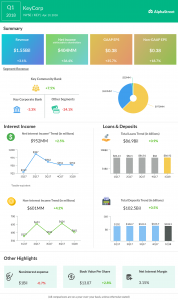 Revenues of the Cleveland-headquartered financial services company, which owns KeyBank, advanced 3.1% to $1.55 billion, supported by higher fee income and net interest income. Also, broad-based growth in commercial and industrial loans helped the core business sustain the underlying momentum. However, there was a dip in revenues from non-core operations.

Net interest income and noninterest income grew 2.5% and 4.2%, respectively during the quarter. At 3.15%, net interest margin from continuing operations was higher by 2 basis points. Meanwhile, higher personnel costs related to acquisitions resulted in an 8% increase in noninterest expense. The company’s provision for loan losses decreased more than 3% to $61 million.

“Expenses this quarter reflect expected seasonality, the acceleration of certain technology costs, and investments. Given our outlook for revenue growth and lower expenses for the rest of this year, we expect to make meaningful progress toward our long-term efficiency ratio target of 54% to 56%,” said KeyCorp CEO Beth Mooney.

Recently, KeyBank entered into an agreement with USI Insurance Services to sell Key Insurance & Benefits Services for an undisclosed amount, as part of its efforts to focus more on core banking operations. The transaction is expected to close in the second quarter.