Earnings Preview: All eyes on Qualcomm to take on Apple’s chip

Chipmaker Qualcomm (QCOM), with its robust streak of beating earnings estimates, will report quarterly results on Nov 7, Wednesday after the closing bell. Here’s what to expect.

The stock has rallied about 50% from its 52-week lows in late April to touch a new one-year high in September. However, market-wide volatility and fears of an impending semiconductor sell-off have battered QCOM as of late.

Due to the current market conditions, analysts expect earnings to fall about 10% to $0.83 a share in the fourth quarter, on a revenue of $5.53 billion ( down 6% year-over-year.)

Last quarter, the chipmaker posted $1.01 per share, beating the consensus of $0.71 per share — a surprise of about 42%. So, a certain trend of beating the estimates is expected out of Qualcomm, which could help garner more investor confidence as it goes to a new quarter to war with Apple’s “Bionic” offerings. 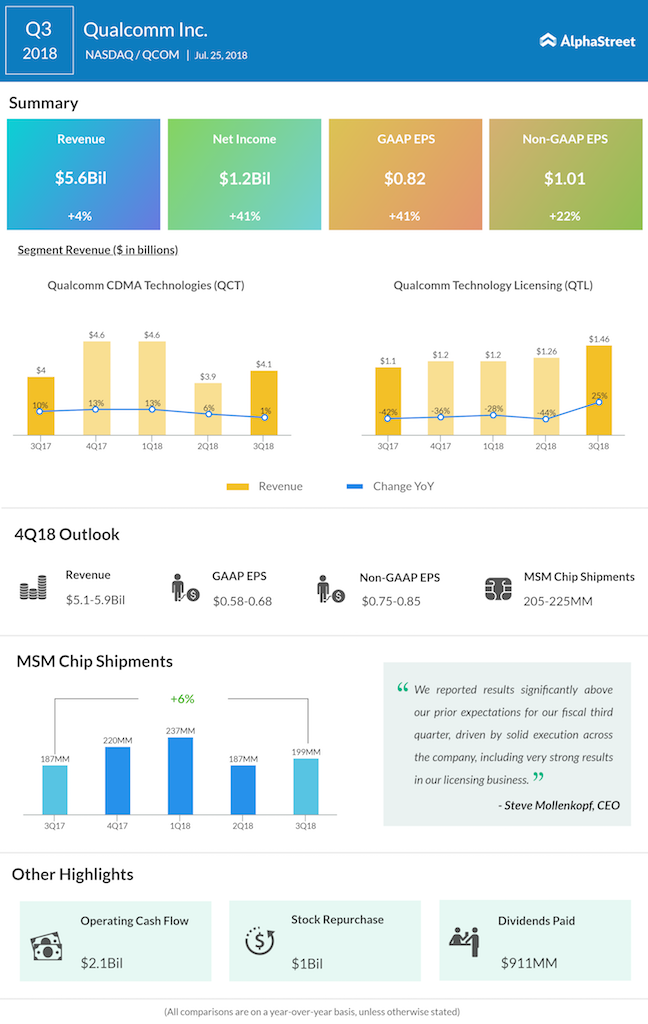 Snapdragon yet to take on the Bionic chip

On Thursday, Royole unveiled its FlexPai foldable smartphone with a new Snapdragon 8150 chipset. It is based on the same 7nm manufacturing processor as the new HiSilicon Kirin 980 and the Apple 12 Bionic. However, Qualcomm’s official event is still months away.

Benchmark results have started to pour in though, and by the looks of it, the new Snapdragon 8150 is faster than the current flagship Snapdragon 845 and Kirin 980 (Huawei Mate 20 Pro.) But the FlexPai chipset seems to have run short of the competition when it comes to the Apple A12 Bionic on the iPhone XS Max or the A12X Bionic on the iPad Pro.

However, these are just based on one device, and we are yet to receive official benchmark results. If Qualcomm does wonders with its new offering, it could mean another win for itself in the semiconductor space.

Chip designer Qualcomm announced a plan to set up a new manufacturing engineering and testing center in Hsinchu, Taiwan. The unit is expected to become operational in the first quarter of next year.

This unit, dubbed COMET or The Center for Operations, Manufacturing Engineering and Testing would be headed by Qualcomm QCT global operations SVP Roawen Chen, and will include a 5G module design center.