Qualcomm (QCOM) reported a 41% jump in earnings for the third quarter driven by solid execution, including strong results in licensing business despite seasonality and soft industry conditions. The top and bottom line came in above analysts’ expectations. Following this, shares of the chipmaker grew 4.17% in the aftermarket trading.

Revenue for the quarter witnessed a modest growth of 4% to $5.6 billion. Revenues from Qualcomm CDMA Technologies (QCT), which account for the lion’s share of total revenues, improved 1% year-over-year, and Qualcomm Technology Licensing (QTL) segment generated a 25% growth in revenues in the quarter.

Earnings climbed 41% to $0.82 per share, while on an adjusted basis, earnings increased 22% to $1.01 per share. From the third quarter of last year, results have been negatively impacted by its dispute with Apple (AAPL) and its contract manufacturers. The company did not record any QTL revenues in the first nine months of fiscal 2018 or the third or fourth quarter of fiscal 2017 for royalties due on sales of Apple’s products.

Speculations are rife that executives at Qualcomm are no longer expecting the Chinese government to approve the deal for buying semiconductor maker NXP. Following this, Qualcomm plans to terminate its purchase agreement to acquire NXP when the deal expires at the end of the day. If termination is decided, then Qualcomm will have to pay NXP a $2 billion breakup fee, which will be paid using existing cash and cash equivalents.

Upon termination of the agreement, Qualcomm plans to pursue a stock repurchase program of up to $30 billion of its outstanding common stock to deliver significant value to its stockholders. During the third quarter, the company returned $1.9 billion to stockholders, including $911 million of cash dividends paid and $1 billion through repurchases of common stock.

After escaping from Broadcom’s (AVGO) hostile takeover bid, Qualcomm has been experiencing rough times for the past few years. This along with the trade war concerns between China and the US as well as the ongoing fight with Apple has been giving troublesome times for Qualcomm. The woes are mounting due to the softness in global 3G/4G device shipments, specifically in China. And severe competition is on the rise from Intel (INTC) to low-cost chip makers like MediaTek and Rockchip.

Intel is scheduled to report its second-quarter earnings on Thursday. Data-centric business, which had significantly lifted the company’s first-quarter results, is once again the prime focus.

Shares of Qualcomm ended Wednesday’s regular trading session at $58.5 on the Nasdaq. The stock had been trading between $48.56 and $69.28 for the past 52 weeks 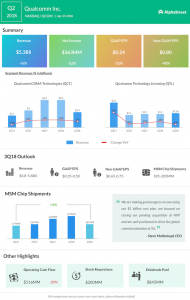