Earnings preview: Kroger has to strive to catch up with peers in Q4

The Kroger Co. (KR) is scheduled to report its earnings for the fourth quarter of 2018 on Thursday, March 7 before the opening bell. Analysts expect earnings to decline almost 16% year-over-year to $0.53 per share and revenue to drop around 10% to $28 billion.

Kroger is facing tough competition in the retail industry, particularly in the grocery space, and this pressure is likely to hurt its top and bottom line results in the fourth quarter. During the first three quarters of this year, Kroger has delivered slow comp sales growth compared to its peers like Walmart (WMT) and Target (TGT).

Owing to the rapid shifts in the industry, retailers are investing significantly to improve their online ordering and delivery options, especially for groceries, in order to provide better customer service and drive sales.

Kroger too is making such investments and as part of its efforts, the company has teamed up with firms such as Ocado and Nuro, to improve its delivery services and has also acquired the meal kit company Home Chef. Despite these measures, Kroger is yet to catch up with its rivals in terms of growth. Kroger’s increased spending on these investments is likely to weigh on its profitability this quarter.

The majority of analysts have rated Kroger’s stock as Hold with some rating it Buy. Two have rated it as Sell. The stock has a consensus price target of $30.57. 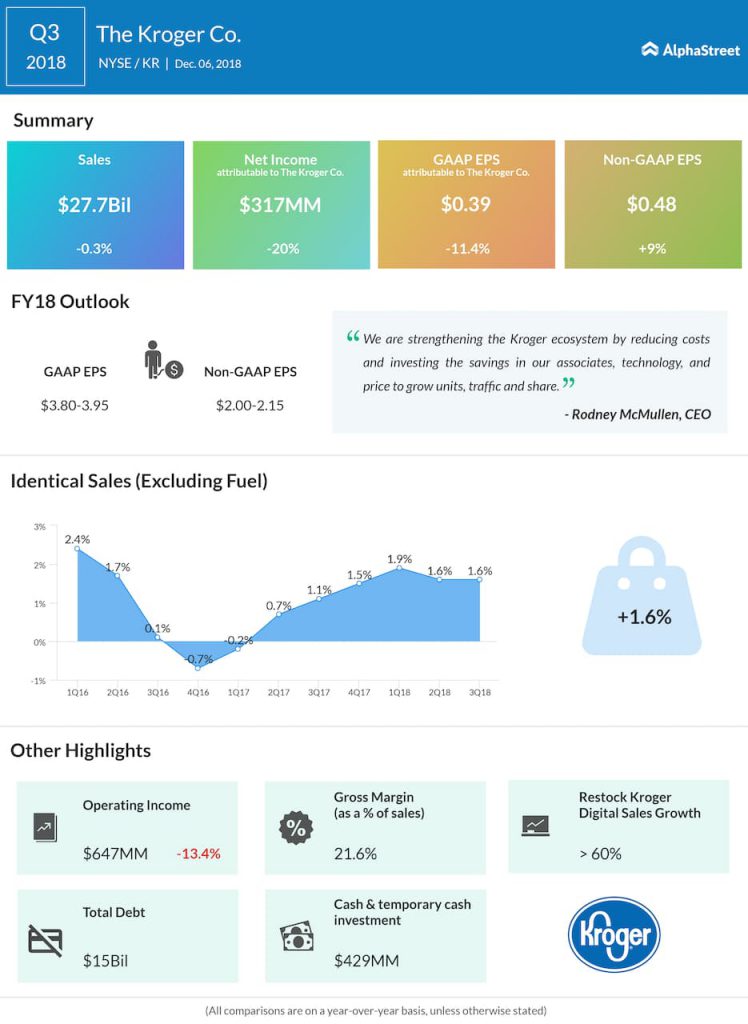 Kroger’s identical sales, excluding fuel, increased 1.6% last quarter. This compares to Target’s comparable sales growth of 5.1% in its third quarter and Walmart’s comp sales growth of 4% in its most recently reported quarter.

Over the past one year, Kroger’s stock has gained 4.6%. The stock was up 2.1% in afternoon trading on Monday.