Earnings Preview: Can Pepsi beat the brew at Coca-Cola?

PepsiCo (PEP) has not been in the news recently, especially when you pit it against its main rival The Coca-Cola Company (KO). A month ago, Coke announced its plans to buy coffee chain Costa from UK-based Whitbread Plc for $5.1 billion. With Costa in Coke’s menu, Starbucks (SBUX) is now a significant rival to the beverage giant. 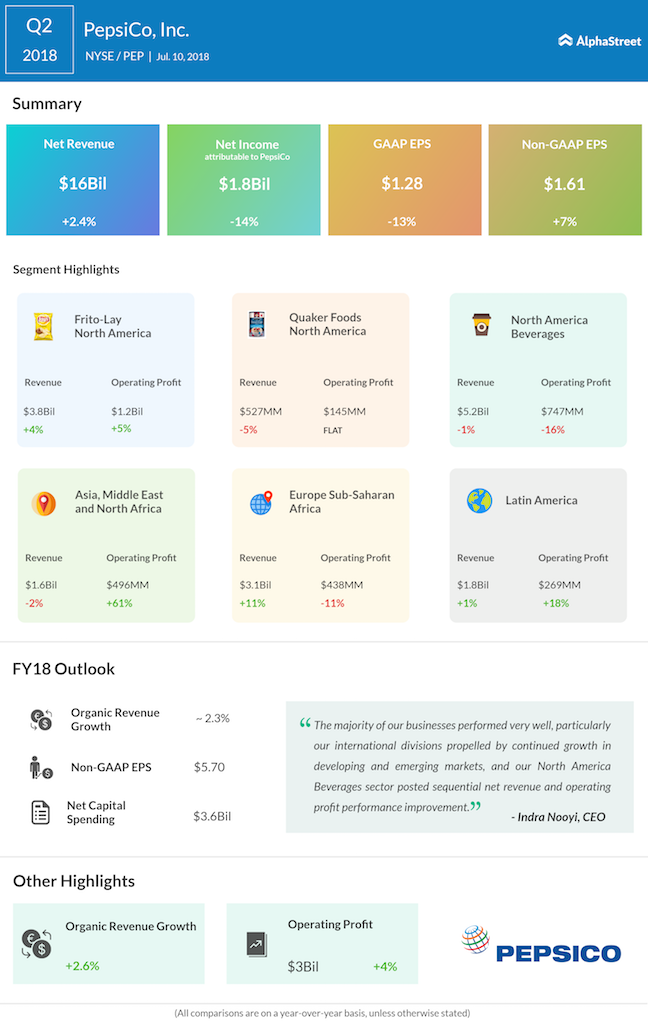 Costa has a presence in more than 30 countries and achieved $1.6 billion in revenues during its recently-ended fiscal year. While the Costa deal is expected to close in the first half of 2019, it also gives Coca-Cola a sizeable international store presence through Costa’s 4,000 stores. Now, coming back to Pepsi, we haven’t heard much from this mammoth food giant in quite some time.

Coca-Cola brews something new with Costa

When the year started, PepsiCo shares were closing at $120 – but in May, it fell to $95. This was after it beat consensus expectations on revenue and earnings. Even though it came back to $115, shares are still down by about 4% year-to-date. While the slowing beverage industry in North America hasn’t affected its results much, it is only so because of the other segments covering for it. This condition is expected to continue at least in the near future, as Frito-Lay becomes PepsiCo’s major profit driver.

A few estimates place the expected revenue of PepsiCo for FY2019 near $67 billion, with a net income margin around 13%. Here’s are a few reasons why that might turn out to be true.

Rise in market spending for beverages: This one goes to Coca-Cola, who has significantly upped its game with rising media spending. The result also pushed PepsiCo down, which swiftly initiated a trademark campaign called ‘Pepsi Generations.’ This turned the tide for Pepsi, with improved sales and market share. However, the costly campaign resulted in cost-cutting, and higher transportation and commodity costs – thereby pushing the operating margin down 16% in the second quarter.

Acquisitions: Buying Bare Foods seems to sync with PepsiCo’s plan to focus on the wellness angle, beefing up its ‘Better For You’ portfolio. Given that Bare Foods is already doing well in the market, it also gives Pepsi a safe portfolio without the considerable investment needed to build products and brands from scratch, including marketing to establish a customer base.

Health is Wealth: With the last couple of years seeing consumers turn to healthier options, PepsiCo’s shift in its portfolio to a wider range called ‘Everyday Nutrition Products’ is to be noted. About 45% of the revenue now comes from these products, which further cements that health is truly wealth for Pepsi. The products in this category include diet beverages with 70 calories or less and products that have nutrients such grains, fruits and vegetables. Along with this, Frito-Lay is also focussing on a premium health line of products that will help push its revenue and margin growth. There is also the enhanced water ranger – both LIFWTR and the newly launched Bubly receiving good reviews. PepsiCo’s line of premium organic live probiotic beverages – KeVita – jumped 50% in retail sales in the first quarter after a 66% growth in FY 2017. It continued its stellar performance in Q2 and is expected to do the same in Q3. These wash away the weak prime portfolio of soda drinks.

PepsiCo gobbles up SodaStream for $3.2 billion

SodaStream deal: Recently, PepsiCo announced that it was buying Sodastream for $3.2 billion. this will add the world’s number one sparkling water brand by volume to its portfolio. Not to mention, it will make PepsiCo the parent of leading manufacturer-distributor of Sparkling Water Makers. In America, the health conscious have tuned to sparkling water as of late with its growth overshadowing the overall bottled water segment. Last year, sparkling water segment grew 38%, compared to 7% for the whole category nationally.

Frito-Lay the chips: Frito-Lay North America contributes about a quarter of the company’s revenues, but its share of the total operating profit is at 42%. And there is no signs of stopping, with Frito-Lay foraying into the “healthy” category with the 2017 success of Lay’s Poppables, and the subsequent introduction of new Lay’s Poppables Honey Barbecue and a 12-count pack of Poppables Sea Salt.

Buying it the e-way: With e-commerce on the rise, PepsiCo has also turned to the online space with the cola mammoth developing a team of about 200 e-commerce members to work toward bolstering the online presence of PepsiCo. And the results are also translating into growth,

Looking ahead, PepsiCo is in an excellent position to turn itself into a complete food company and not just get stuck in the age-old Cola Wars. If everything goes PepsiCo’s way, we’ll soon see both the soda giants position themselves as very different players in the future market. And it will be exciting to watch… especially if you were born in the era of each second ad either Pepsi besting Coke or the other way round.