Eli Lilly (LLY) reported second quarter results which exceeded the consensus estimate. Shares of Eli Lilly were trading up about 5% in the pre-market trading on upbeat results and the encouraging outlook as well as the company’s decision to separate Elanco Animal Health business as a separate public company. 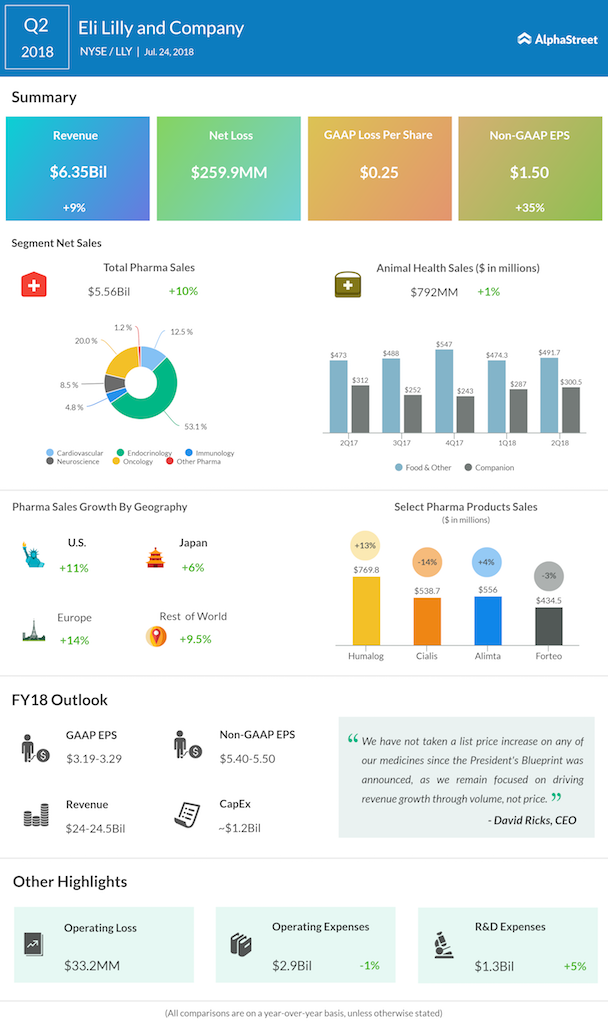 Lilly lifted the fiscal year’s revenue target to a range of $24.0-24.5 billion versus the prior estimate of $23.7-24.2 billion, due to the strong pharmaceutical portfolio performance and higher collaboration revenue.

In a separate press release, Eli Lilly announced that it will separate the Elanco Animal Health division by filing an IPO for it. The company plans to take less than 20% of Elanco’s shares and the IPO process is expected to be completed in Q3 or Q4 2018.

“As it relates to U.S. drug pricing, the Administration has accelerated an important discussion, and Lilly is committed to working for greater affordability and access to our medicines,” said CEO David Ricks. Last week, President Trump thanked Novartis (NVS) and Pfizer (PFE) in a tweet for not hiking their drug prices.

The Indianapolis, Indiana-based drug company, which acquired ARMO Biosciences in May for $1.6 billion, inked a multi-year drug discovery deal with New Jersey-based Anima Biotech on Monday. Under the terms of the deal, Anima will receive $30 million in upfront payments and $14 million in research funding. If potential milestones are achieved, Anima could receive up to $1.05 billion. Lilly will be responsible for the clinical development and commercialization of products.

Shares of Eli Lilly, which achieved a new 52-week high ($90.13) on July 18, has crossed that and was trading at about $93 before the bell. The stock had increased about 5% both in the year-to-date and past 52 weeks period.