Everyone in entertainment biz wants a slice of the Netflix pie

The pace at which Netflix (NFLX) is signing partnership agreements with streaming companies and cable TV operators across the world can only be matched with its own subscriber growth. Going by the hectic activity on the content-sharing front in recent months, the day is not far when Netflix shows will be available on every single entertainment platform.

In a deal apparently aimed at broadening their successful mutual-benefit partnership, Comcast (CMCSA) has decided to include Netflix shows in the streaming packages it offers on various platforms. While it is the first time customers will be paying for Netflix content through a third-party in the U.S., Comcast subscribers already have the option to access Netflix using their cable receivers, under an earlier deal. 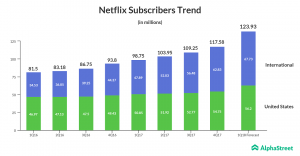 Starting this month, viewers will be able to access Netflix content bundled with the existing and new Comcast subscription plans on TV, smartphone, and internet. The unique partnership, wherein the rivals patched up their differences to achieve a common goal, will help Comcast leverage Netflix’s sought-after on-demand movies and videos. It is not known yet how the companies are planning to share the revenue.

The landmark deal signals a paradigm shift in the business dynamics in the cable TV industry, which is currently facing the mammoth challenge of subscribers drifting en masse to the internet. The highly popular Netflix shows and original content could act as a deterrent to the widespread cord cutting among cable TV customers.

As for Netflix, it is not just another deal, but part of its new business strategy. A couple of months ago, the streaming giant signed an agreement with European television broadcaster Sky Plc. to offer its content to the latter’s customers in Europe in bundled packs. Interestingly, Sky has been facing stiff competition from Netflix itself, besides Amazon (AMZN).

So, there should be something that makes Netflix everyone’s favorite! One of the factors is the long-term prospects of associating with a company with such strong fundamentals – the stock price more than doubled over the past 12 months. Also, Netflix’s subscriber base is around 115 million as of December 2017 and is growing at a phenomenal rate. When it comes to original content and the amount being invested to expand the content library, the company is far ahead of its peers.