FedEx appears to be recovering from the TNT cyberattack as revenues rose during the quarter despite the residual impact from the incident.

Shares climbed about 4% following the results announcement and appear to have recovered from the drop last month over the news of Amazon’s proposed package delivery service. If at all Amazon goes ahead with its plans for its own shipping service, FedEx and its peers face a huge threat.

The ongoing expansion of e-commerce is beneficial to delivery companies like FedEx although business deliveries are more profitable compared to home deliveries.

FedEx plans to invest the benefits from the tax reform in wages and pensions along with other investments for the construction and expansion of its shipping hubs in Memphis and Indianapolis.

FedEx has partnered with Walmart to open FedEx Office shipping locations at Walmart stores, a move which is expected to benefit both companies as part of the efforts to tackle Amazon.

FedEx has also been facing some trouble with the recent package explosions in Texas, and the company is fully cooperating with officials in the investigation. Hopefully, these issues are expected to be resolved soon.

FedEx appears to be on the right path of growth and investment and the year ahead looks positive. 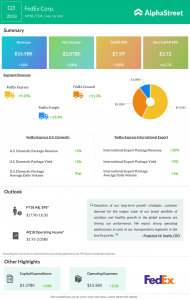