Italian sports carmaker Ferrari N.V. (RACE) reported an 18% growth in earnings for the second quarter helped by higher volume and increased mix/price. The company experienced the continued growth in shipments of its vehicles and confirmed its full-year guidance. The stock inched down about 0.4% in NYSE at 10:58 AM ET today.

Net revenue declined 1.6% to EUR 906 million but was up 1.4% at constant currencies. The top line was hurt by lower sales of LaFerrari Aperta, lower sales of Maserati due to a decline in engine volumes as well as negative impact from foreign exchange. This was partially offset by the positive contribution from higher volumes, solid mix from sales of 12 cylinder models (V12) and pricing as well as higher sponsorship revenues.

Net profit grew 18% to EUR 160 million or EUR 0.85 per share. Higher volumes and mix/price drove the results, which was positively impacted by a strong performance from V12 models and pricing rises along with the first deliveries of the strictly limited edition Ferrari J50.

Revenues from Cars and spare parts inched up 0.2%, helped by higher volumes led by the 812 Superfast, the 488 and the GTC4Lusso families as well as the first deliveries of the newly launched Ferrari Portofino. Engines revenue plunged about 20%. The division saw a decrease in sales to Maserati due to lower engine volumes.

Sponsorship, commercial and brand revenues were up 2%, helped by an increase in sponsorship and higher 2017 championship ranking compared to 2016, partially offset by lower sales generated by brand-related activities and FX.

Ferrari, which is expected to introduce hybrid cars in 2019, targets net revenues for the full year of 2018 to exceed EUR 3.4 billion. Shipments are expected to be more than 9,000 units, including supercars. Capital expenditures for the year are still likely to come to around EUR 550 million.

Last week, the US automaker General Motors (GM) reported better than expected results for its second quarter, while Ford Motors (F) posted weaker than predicted results. Fiat Chrysler (FCAU), which spun off from Ferrari in 2016, reported an unexpected 35% dip in profit for the second quarter due to weaker performance in China. 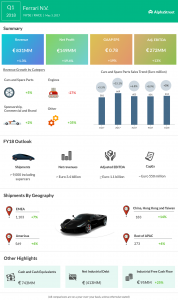