Ford Motor Company (F) reported its first quarter results with a year-over-year revenue increase of 7% to $42 billion, driven by lower cost and expenses, while profit jumped 9% to $1.7 billion or $0.43 per share, aided by the lower tax rate. The earnings and revenue beat lifted Ford shares 3% in the after-market trading.

The company is foreseeing to reduce costs, especially in the areas of sales, marketing and engineering. Ford has lifted its 5-year cost savings target that was announced in last October by $11.5 billion to $25.5 billion. 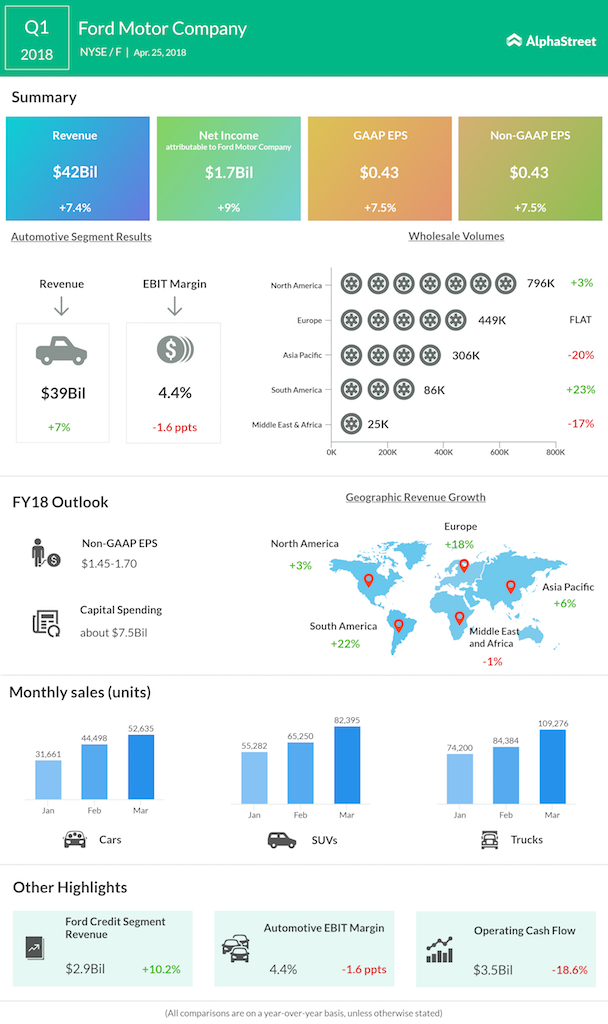 Ford is revamping its complete portfolio and is planning to stop investing in next-gen traditional Ford sedans, in line with declining demand from customers for passenger cars and reduced profitability. By 2020, the company expects trucks to account about 90% of its portfolio in North America. In the next couple of years, Ford plans to make only two cars, namely Mustang and a new Focus Active crossover.

Regionally, South America reported its sixth consecutive quarterly loss, while North America was offset by higher commodity cost, with profit margin declining just more than a percentage point to 7.8%. However, Europe reported an 18% increase in revenue, aided by forex and increased pricing.

Ford is making strides into new avenues with the development of battery electric vehicles, which Ford expects to roll out by 2020. The carmaker is also planning to add hybrid-electric powertrains to its best-selling vehicles such as the F-150, Mustang, Explorer, Escape and Bronco.