Amid tough times that involve emission scandals and autonomous vehicle mishaps, the automotive industry appears to be doing well. A recent study indicated that vehicle quality has improved over the past four years to reach its best level thus far. Korean car brands Genesis, Kia and Hyundai earned the top three places while Volvo, Jaguar and Land Rover ended up at the bottom of J.D. Power 2018 US Initial Quality report. 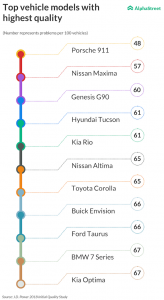 The total industry average improved four points to 93 issues versus 97. Ford (F), General Motors (GM) and Fiat Chrysler Automobiles (FCAU) surpassed the industry average on improvements. The survey, which recorded the number of problems per 100 vehicles, highlighted an increase in issues with driver assistance systems like cruise control and parking aid. The study also indicated that launch models have more issues compared to carryover models and that most problems were design-related.

The data was based on 233 questions and focused on a 90-day ownership period from February to May, 2018. Brands such as Tesla (TSLA), Bentley, Ferrari and Rolls Royce were not covered in the survey, partly due to a smaller customer base. Porsche, which held a top spot last year, saw its Porsche 911 ranked as the model with the highest quality score this year.

As the world moves towards electric vehicles, Porsche too has some big ambitions. The German automaker has picked up a 10% stake in Rimac Automobili, a Croatian engineering company that works on electric hypercars. Porsche plans to strike a development partnership with Rimac. Porsche will also soon start the production of its own long-range electric vehicles.

Meanwhile, looking at the electric and autonomous vehicles markets in general, a new study by consulting firm AlixPartners indicated that over the five-year period from 2012 to 2017, there has been a 47% increase in expenditures on electric and self-driving technologies. This number is projected to increase to $255 billion over the next five years. Over 200 EV models are set to come out by 2022, most of which will end up in a profit crunch due to severe competition, high costs and low volumes.

The study also points to a slow rate of growth for the global auto market at 2.4% annually through 2025. In the US, light-vehicle sales are expected to total 16.8 million units in 2018, down from 17.2 million units last year. This will further drop to 15.1 million units in 2020. The study also projects that by 2030, full-battery EVs will comprise about 20% of the US market with around 3 million in self-driving vehicles sales.

While automakers are doing everything they can to improve the quality of their vehicles, the mad race towards EVs and AVs and the enormous cash burn in that area right now might not be the best strategy for them at present.

Related: Ford mulling a partnership with Volkswagen for vehicle development