Drugstore retailer Fred Inc. (FRED) that was due to report the fourth quarter earnings on April 18, postponed the release to May, as the company was looking to unload its specialty pharmacy business. In its fourth quarter 2017 release today, the company reported a 2% growth in net sales to $477.3 million. This improvement is significant considering the closure of underperforming stores and decrease in comparable sales.

The decline in comparable store sales slowed to 0.9% during the quarter when compared to a 4.8% decline in Q4 2016. Shares of the company that fell almost 80% over the last 12 months advanced about 9% during the pre-market trading. However, net loss from continuing operations widened to $22.6 million or $0.62 per share compared to a loss of $21.7 million or $0.58 per share in the prior year. 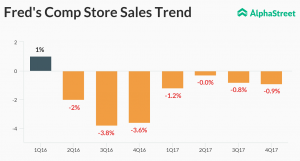 The Memphis-based company, which was forced to abandon its bid to acquire to nearly hundreds of Rite Aid stores, is under immense pressure as it lost a deep bench of its key executives during a highly volatile period. The company’s CEO Michael Bloom resigned in less than two years to pursue other interests. Fred also lost its COO Timothy Liebmann and chief merchandising and marketing officer Mary Louise Gardner recently. Joseph Anto has been appointed as the Interim CEO.

“We are bringing new talent into every part of the organization, including store operations, supply chain, private brands, finance and real estate. Additionally, we have multiple initiatives focused on driving revenue and gross margin in the front store and we continue to actively manage and reduce our SKU count in order to optimize our assortment,” said Joseph Anto, interim CEO.