From bull to dog: Understanding the GE story

Had he been alive today, Charles Darwin would have invested in GE, for the industrial mammoth’s 125 years of existence had been nothing short of “evolution of a different kind”. Starting off its journey as one of the 12 members of the original Dow Jones Industrial Average (DJIA), GE boasts of an unparalleled history and operating diversity. In 2018, GE manages to be the only member among the initial 12 to feature in the prestigious DJIA, but the story is hardly the same.

While the DJIA index rose over 24% in 2017, GE became its worst performing member, sinking 46%. 2017 will henceforth be known as the year that saw the evolution of a bull into THE Dog of the Dow.

Today, GE is grappling with tight cash flow and high debt balance. The person who had been at the helm for 16 years has “retired,” and its dividend has been cut by half. Here’s more color – GE today has a lower market cap than Bitcoin. 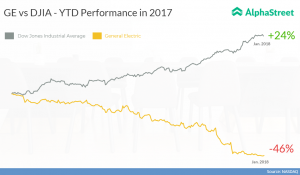 So what went wrong?

A lot many things, actually. The “legendary” ex-CEO Jack Welch, and his successor Jeff Immelt embraced the idea of diversifying operations into various sectors to withstand any major economic tremors. Under Welch, GE’s market value grew to $280 billion from a mere $12 billion in 1981, riding on over 600 acquisitions. While the strategy worked well during Welch’s tenure, Immelt was left with an overly complex empire with operations in nearly every imaginable industrial space, as well as NBC and a major bank.

The management stayed blind towards the growing prevalence of renewable energy as well as electric car market in the US, which would substantially cut down oil consumption.

But Immelt continued the shopping spree initiated by Welch, and as a topping, made capital allocation “miscalculations” every few years. Take for example the recent acquisition of Baker Hughes, which attested GE’s commitment in the oil and gas industry. The management stayed blind towards the growing prevalence of renewable energy as well as electric car market in the US, which would substantially cut down oil consumption. The management is now planning to jettison Baker Hughes from its portfolio, but that will take some time since the merger agreement required GE to hold on to it for a minimum of two years.

GE entering the financial services business just ahead of the banking and housing crash in 2008, and then selling off its assets as the industry was starting to recover, is seen as another short-sighted move on the part of the management. Regarding the $9.5 billion Alstom acquisition, this is what the current CEO, John Flannery, who took charge in August this year, told CNBC – “If we could go back in the time machine today, we would pay a substantially lower price than we did.”

According to Forbes, GE paid approximately $1.7 billion as M&A- related charges since 2001.

Bad luck played a part as well. Four days after Immelt took over as the chief of GE, the twin tower attack occurred, which had a damning impact on its aircraft engine, as well as insurance arms. And finally when Immelt left the seat after 16 years, shares were down by almost a third of what it was when he took charge.

Let’s take a look at why you should probably stay away from this stock. This industrial behemoth, which survived the Great Depression and the dot com bubble, is currently going through the most uncertain period of its 125-year run. Investor sentiments have hit the rock bottom, thanks to rising pension obligations, poor performance in the energy segment, as well as cash flow concerns.

During the November Investors Day, Flannery announced the second dividend cut in the company’s history (the first happened during the Great Depression) to improve margins and free cash flow. The 50% “unkindest cut” on dividend, though inevitable, undermined investor confidence in the stability of the stock.  Quite alarmingly, the company’s dividend pay-outs were higher than its free cash flow over the years, and the dividend cut was a necessity in the light of a Fitch downgrade.

Flannery is putting the focus back on GE’s industrial roots, where the Aviation and Healthcare divisions have been showing considerable growth in the past few years.

Then there is the competition from rival companies including Honeywell, United Technologies and 3M, which have been doing decently well.

While all that is true, some market pundits feel the worst is over for the company. The recent bloodbath at GE Power, which saw about 12,000 employees or 4% of the company’s total workforce thrown out of jobs, evinces CEO Flannery’s resolve to right the ship through some drastic measures. While the company blamed the lacklustre power market for the layoffs, it was a first step towards achieving cost cuts of about $1 billion by next year. The dividend cut, meanwhile, is estimated to save approximately $4 billion. 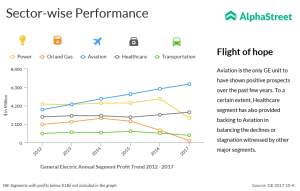 The company is also determined to exit low-performance operations including its lighting, transportation, industrial solutions and electrical grid businesses to make a more simple and streamlined entity. Flannery is putting the focus back on GE’s industrial roots, where the Aviation and Healthcare divisions have been showing considerable growth in the past few years.

For GE, the worst is already embedded into the stock and hence, will have a cushioning effect with a slight safety margin compared to its rivals, in case of any economic tremors.

Though efforts are evident, there is no guarantee that Flannery will be able to undo the errors committed by his predecessors. If he manages to pull that off, the upside potential is enormous. There is also the general tendency of the Dogs of the Dow snapping back to performance the very next year.  Investors can make use of the current pessimism in the market to purchase this bluechip stock at a highly discounted rate.

But this is recommended only to long-term investors, as the process of turning company around will take its time. Next year will see massive cut downs in expenses, primarily in the Power unit. More conservative investors are advised to watch the stock in 2018, by the end of which, we expect to have a proper view of the direction in which the company is headed.