From the Shark Tank to Bezos: Amazon buys Ring for $1 billion

If there is a story of chance, luck, failure, and success all bound together by fate, it is the story of Ring.

Back in 2013, when Jamie Siminoff pitched his idea “DoorBot” to the investor-judges of Shark Tank in its fifth season for a measly $700,000, it did not go well. Walking away with nothing from that episode, he went on to work on his idea of a video doorbell connected to your smartphone through an app.

The judges might have found it flat, but the public went crazy after the airing of the episode, bringing about $5 million more in sales.

Soon, Siminoff rechristened his brand to “Ring” — a more approachable and financially bankable name. And that is when he caught the attention of Virgin Group founder Richard Branson. The millionaire, who happened to see a tourist to his island interact with a delivery boy while on vacation, quickly took to Ring.

With Richard’s backing, the new $28 million funding made Ring into a $60-million venture.

Now, in the second month of 2018, Amazon is all set to buy the home security solutions startup — at a reported price of about $1 billion according to a Reuters report citing unidentified sources.

If this holds true, Ring will make it to the second biggest Amazon buy — after the $14-billion Whole Foods deal.

The value that Amazon placed on Ring is no laughing matter. It also points to how Amazon is looking at things. With a range of products to delivery solutions and home solutions, Ring’s portfolio would also add the doorway, a conduit completing the one void Amazon could fill in its entire circle of consumerism.

INFOGRAPHIC: These are the biggest Amazon deals since 2017 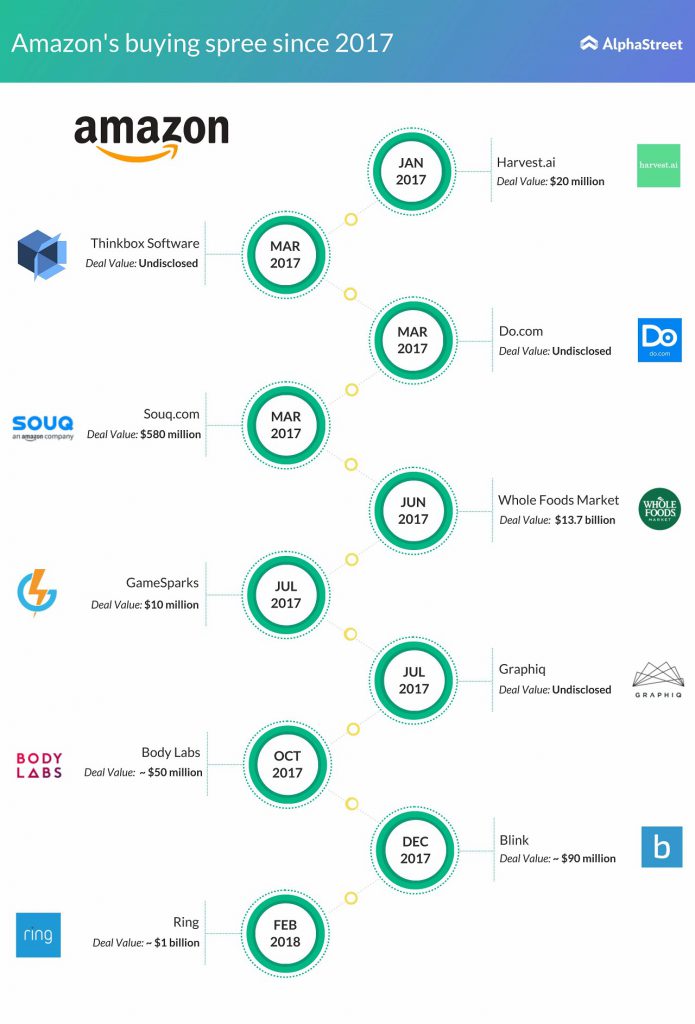