The company, which saw the unexpected exit of its CEO after a short stint earlier this month, also announced that Shane Kim, a current member of the company’s Board of Directors, will serve as interim CEO until a permanent one is named. Rob Lloyd was promoted to Chief Operating Officer and Chief Financial Officer, while Dan DeMatteo will continue serving as GameStop’s executive chairman of the Board.

The company has been struggling to keep pace with the changing trend towards a digital-sales focused industry and had implemented numerous initiatives to stay in the race. While Nintendo Switch was a bright spot for the company in 2017, other consoles of the company didn’t fare well. 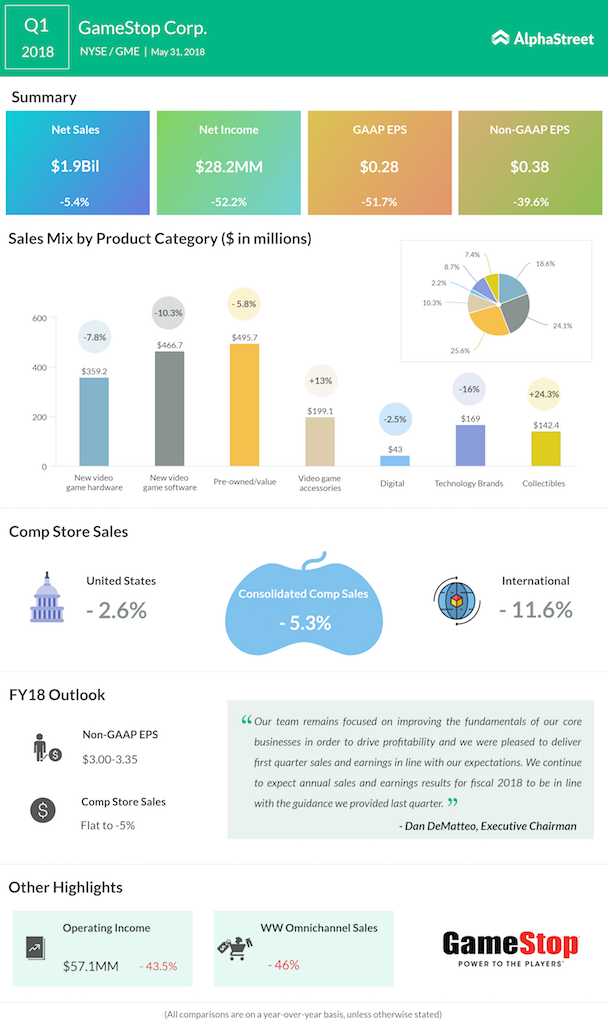 In the first quarter of 2018, all the company’s segments, barring Video game accessories and Collectibles, reported negative sales. The decline in sales in most of the company’s segments resulted in a consolidated comparable store sales decline of 5.3%, with the US segment declining 2.6% and the international segment slipping 11.6%.

As expected, GameStop’s new hardware sales fell 7.9% while new software sales fell 10.3%. Also, pre-owned and value video game products, which contribute about 26% to the company’s revenue, plunged 5.7% along with worldwide omnichannel sales, plunging 46%. These declines were due to limited allocation of the Nintendo Switch at launch, which drove about 93% increase in omnichannel sales in the year-ago quarter.

The company had last quarter guided to a back half weighted earnings for the year due to the overlap of the Nintendo Switch launch in the first half of 2018. GameStop reiterated its previous guidance and still expects total sales to decline in the 2-6% range, with comparable store sales expected to be flat to down 5%. Adjusted EPS for the fiscal year 2018 is expected in the $3.00-3.35 range.

GameStop has not seen a good run of its stock over the past one year, declining 41%. After the earnings release, the stock fell over 4%, continuing its dismal performance.