Shares of Garmin (GRMN), the maker of GPS sports watches and devices, jumped 1.47% to $59.86 during the pre-market trading, after the company topped sales and earnings estimates in Q1 2018. The growth in sales was aided by strong double-digit growth in its outdoor, fitness, aviation, and marine devices.

During the first quarter, the Swiss company reported an 11% growth in its total sales to $710.8 million, easily topping analysts estimation of $679.15 million. Garmin, which operates through five key segments, stands out among rivals like Fitbit (FIT) and Apple (AAPL) mainly due to its Outdoor and aviation division. In fact, these divisions are behind the company’s recent quarterly earnings beat. 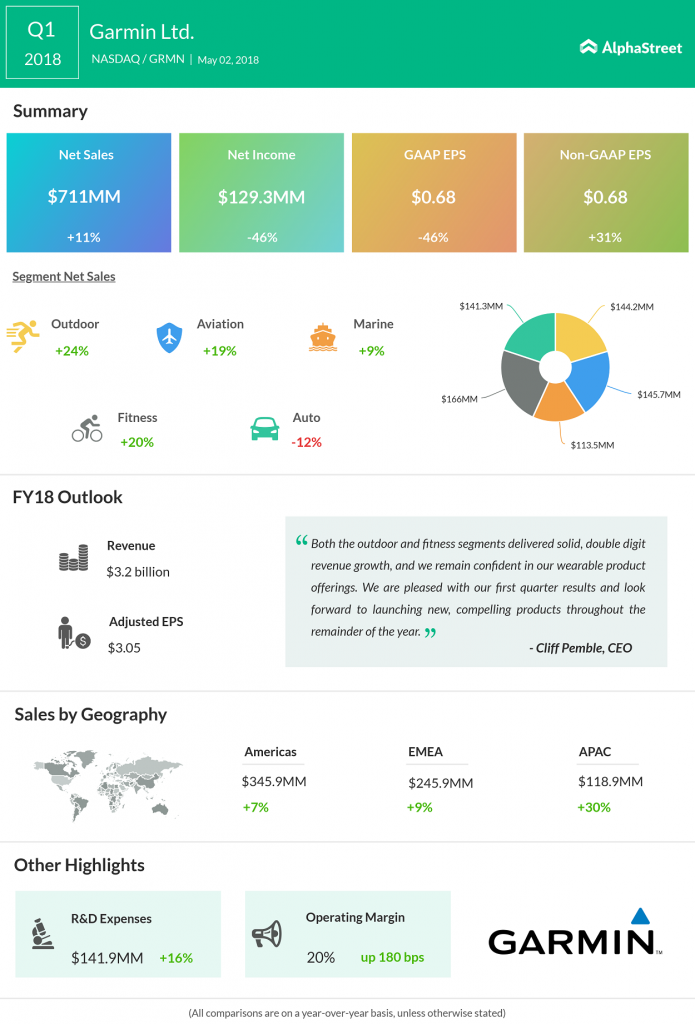 The significant growth in the outdoor segment was mainly due to the Fenix 5 line of watches that was launched last year.  This was followed by a 20% revenue growth in fitness division and 19% revenue growth in its aviation division. The total sales from the company’s outdoor, fitness, aviation, and marine divisions, collectively grew 18% over the prior year quarter and contributed 80% of total revenue.

The company’s auto division revenue slipped 12%. With most of the growth from other segments, it shows how Garmin cut its dependency on automotive products that once powered its growth.

The company’s pro forma earnings rose 31% to $0.68, and diluted earnings per share fell 46% to $0.68. However, the earnings topped estimates as the analysts anticipated earnings of $0.12.

For the full year, Garmin maintains its outlook for revenue of approx. $3.2 billion and pro forma EPS of $3.05.

Garmin, which shipped more than 20 million wearable devices over the last 15 years, is still a free-cash-flow cow. The company is gaining a strong foothold in the wearables industry that was otherwise dominated by its rivals Apple and Fitbit.

Competitor Fitbit is expected to report earnings today after market close. Analysts expect the rival company post a zero profit to a loss of $0.17 per share on a revenue of about $314.19 million.