Engineering behemoth General Electric (GE) reported an increase in first quarter profit, helped mainly by improved performance by the aviation and healthcare divisions. The market responded positively to the better-than-expected results, and the stock gained more than 5% in the pre-market.

Earnings, excluding one-time items, rose to $0.16 per share from $0.14 per share a year earlier, exceeding the street forecast.  On a reported basis, the company posted a loss of $0.14 per share, which marked an improvement from the $0.01 per share loss recorded in the prior-year quarter.

The Boston, Massachusetts-based industrial conglomerate, which is embroiled in the worst crisis in its history, reported revenues of $28.66 billion during the three-month period, up 7% compared to the first quarter of 2017.  The topline came in above analysts’ expectations. 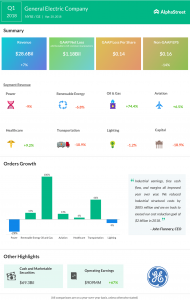 Though Oil & Gas revenues jumped 74% during the quarter, it is entirely attributable to acquisitions, leaving organic growth in the negative territory.

GE also reaffirmed its full-year earnings outlook, contrary to expectations for a downward revision to reflect the softness in power and some non-core businesses.

Though Oil & Gas revenues jumped 74% during the quarter, it is entirely attributable to acquisitions, leaving organic growth in the negative territory.

“The first quarter is a step forward in executing on our 2018 plan and we are seeing signs of progress in our performance. Industrial earnings, free cash flow, and margins all improved year-over-year. We reduced Industrial structural costs by $805 million and are on track to exceed our cost reduction goal of $2 billion in 2018,” said GE CEO John Flannery.

Though Flannery’s earlier assurance that “2018 would be a turnaround year” had come as a much-needed relief to investors, the current state of affairs at the company leaves much to be desired.

Recently, GE shares had dropped to the lowest level in its history after federal lawsuits added to its operational woes.