Shares of General Mills (GIS) surged 1.50% during pre-market trading, after the company reported better-than-expected earnings during Q4 2018, aided by its cost-cutting initiatives. The company’s earnings fell to $0.59 per share from $0.69 per share a year earlier. Excluding items, General Mills earned $0.79 per share, beating analysts estimate of $0.72 per share.

The Cheerios cereal maker reported revenue of $3.89 billion, up 2.1% and in line with analysts expectation. While sales in the North America Retail segment remained flat at $2.39 billion, net sales at its smaller Convenience Stores & Foodservice segment increased 5% to $511 million, helped by growth in frozen meals and snacks. Favorable foreign currency exchange pushed net sales for the Europe & Australia segment up 14% to $556 million. 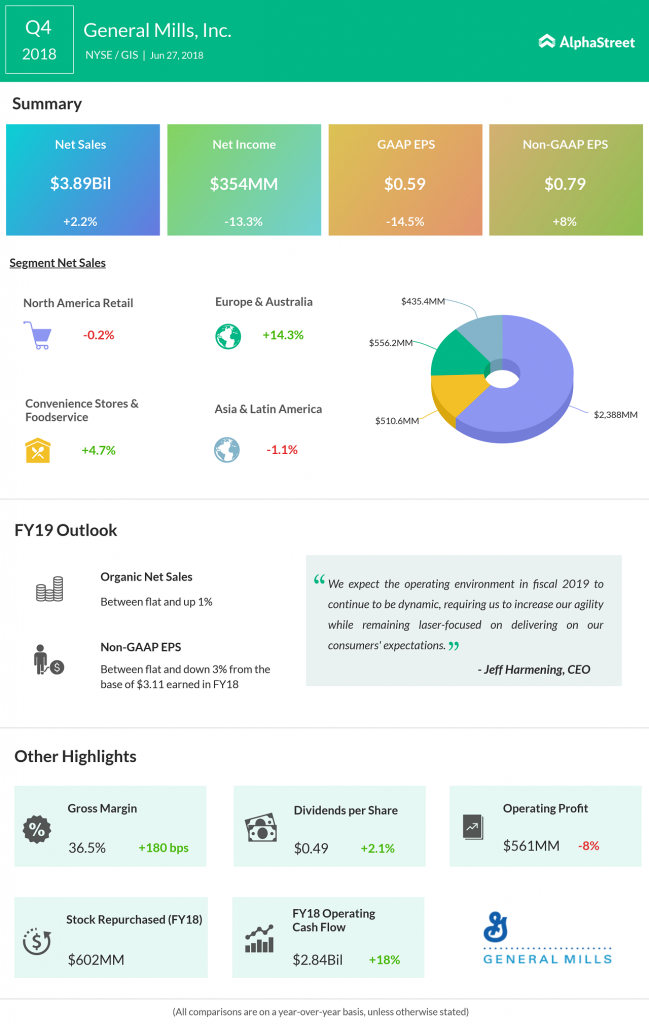 General Mills entered the pet food category this year with the acquisition of Blue Buffalo for $8 billion in April. According to General Mills, the newly acquired company will be reported as a new Pet operating segment.  As a result, the fiscal 2018 financial results do not include Pet segment results.

“We made significant progress toward competing more effectively this year, with strong innovation, marketing, and in-store execution driving positive organic sales growth in each of our last three quarters.  And we moved to reshape our portfolio for future growth with the acquisition of Blue Buffalo, a fast-growing, highly profitable business that is leading the transformation of the U.S. pet food category,” CEO Jeff Harmening.

For fiscal 2019, the company expects organic net sales to be flat to 1% higher. Including the impact of the Blue Buffalo acquisition, net sales are expected to increase 9-10%. Adjusted EPS is expected to range between 0% and negative 3%.