The Minneapolis-based company lowered its full-year earnings forecast, citing cost escalation. Following the report, the stock retreated further from the lows witnessed after losing 16% over the last 12 months.

Earlier, investor sentiment had taken a beating after the company announced plans to acquire pet food company Blue Buffalo, amid concerns over the price and strategy. 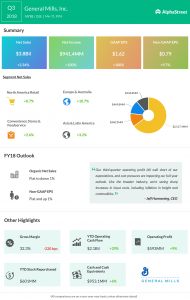 Helped by higher sales and a one-time tax benefit, net earnings climbed to $1.62 per share from $0.61 per share last year. Excluding special items, earnings rose 9% to $0.79 per share, exceeding market expectation by a penny.

At $628 million, total segment operating profit was down 6% compared to last year.

Sales moved up 2.3% year-over-year to $3.9 billion, with a 1% gain in organic sales. Driving the growth, North American Retail, the company’s main operating segment, registered a modest increase. A double-digit growth in Europe and Australia also contributed to the topline, which remained under pressure from competition and higher operating costs in recent quarters.

The company also downwardly revised its outlook for the current fiscal year to reflect the upward trend in operating and logistics costs.

Excluding the effect of the acquisition, segment operating profit is forecasted to drop 5-6% in 2018, compared to the previous estimate of no growth to a 1% dip.

In the fourth quarter, segment operating profit is expected to rebound supported by cost savings and improved price realization.

The revised outlook for full-year adjusted earnings is flat to 1% increase, down from the initial estimate of a 3-4% rise. Meanwhile, the company said it continues to expect flat organic net sales.

Among General Mills’ peers, Kraft Heinz (KHC) and Kellogg Company (K) are scheduled to announce their financial results for the most recent quarter on May 18 and May 10, respectively.