General Motors (GM), the largest automobile manufacturer in the US, reported a decline in first quarter earnings, hurt by one-time charges related to the winding up of its South Korean operations. Revenues declined from last year even as the company continues its shift from passenger cars to crossovers. Though analysts had predicted a fall, both earnings and revenues came in above expectations.

Net income, on an adjusted basis, dropped to $1.43 per share from $1.75 per share in the first quarter of 2017. GAAP earnings plunged 58% to $0.72 per share during the three-month period, impacted mainly by a $942-million charge from asset impairment and termination benefits related to the closure of loss-making plants in South Korea. Dragging the bottom line, revenues declined 3.1% year-on-year to $36.1 billion, but surpassed market expectations. 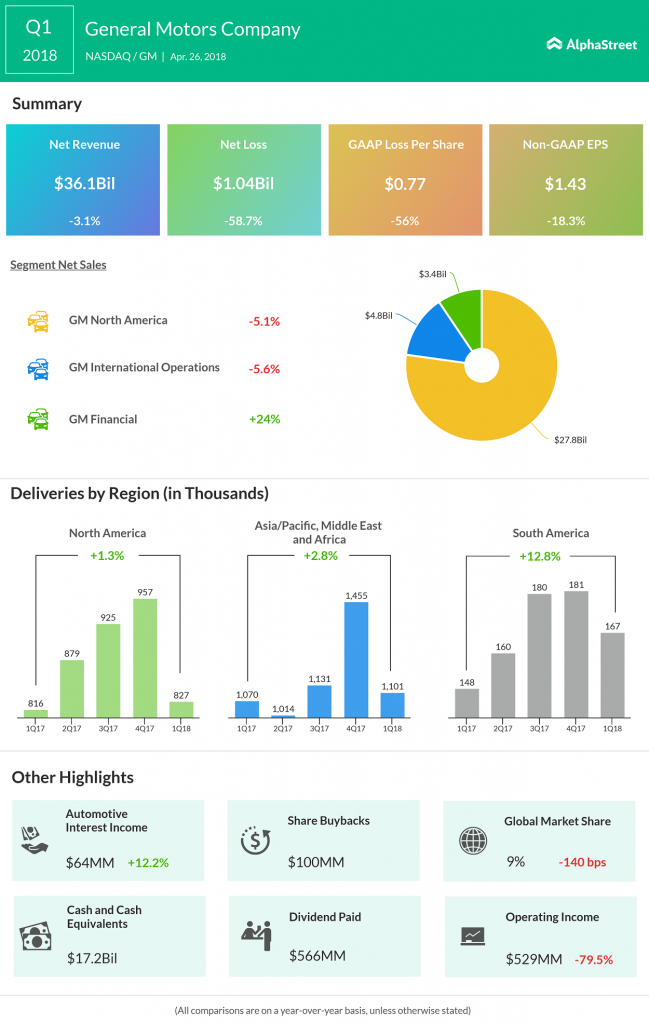 Total vehicles sales in the US increased 4% to 715,794 units in the first quarter, helped by a double-digit growth in the sales of the leading models, including Chevrolet, Buick and GMC.

GM’s renewed focus on SUVs and crossovers resulted in deliveries doubling in the local market and China in the first quarter, with strong performance by GMC Terrain and Chevrolet Traverse. The company added an array of new models to the GMC brand, which will hit showrooms in North America later this year.

“Results this quarter were in line with our expectations with planned, lower production in North America related to the transition to our all-new Chevrolet Silverado and GMC Sierra. We are on plan to deliver another strong year in 2018,” said CEO Mary Barra.

The US auto industry has been facing headwinds from rising raw material prices, especially aluminum, ever since President Trump imposed restrictions on imports from China.