GoPro Inc. (GPRO) reported a wider loss in the second quarter due to a decline in revenue. The top and bottom line exceeded analysts’ expectations. After remaining in the red territory throughout the day, the stock showed a short gain after the earnings release but returned back to the danger zone as investors were more concerned on the future of the camera maker.

The company shipped 1.07 million camera units in the second quarter of 2018, up from 1.06 million units shipped in the previous year quarter. GoPro had lowered its headcount to 948 employees from 1,247 last year.

Executive chief Nicholas Woodman believes that the company’s sales are solid in all regions indicating strong demand, and GoPro will be profitable in the second half of 2018. The company plans to exit the year with an improved margin profile that it believes translates into a profitable 2019.

Geography-wise, revenue fell by 16.2% in the Americas, while revenue in Europe grew by 13% and Asia and Pacific revenue rose by 1.7%. Channel-wise, Direct revenue dropped by 14.4%, while revenue from Distribution increased 8.4%.

In mid-July, GoPro said that during the second quarter of 2018, it exceeded 30 million Hero cameras sales since the debut in November 2009. GoPro has sold more than 4 million Hero5 Black cameras, which reached the milestone three months faster than Hero4 Silver.

Social followers increased by more than 760,000 to more than 36 million across all platforms, driven primarily by sequential growth on YouTube and Instagram.

Shares of GoPro ended Thursday’s regular trading session down 2.12% at $5.99 on the Nasdaq. The stock, which is down more than 1% in the after-hours session, fell more than 25% for the past year and more than 20% for the year-to-date. 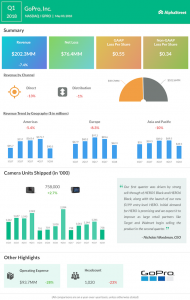