Shares of Groupon (GRPN) fell 7% during the pre-market trading after the company reported second-quarter results as it missed analysts estimates on both top-and-bottom lines. The stock continued to trade in the negative zone during the early regular trading hours. The results were mainly hurt by $75 million charge related to the IBM litigation. 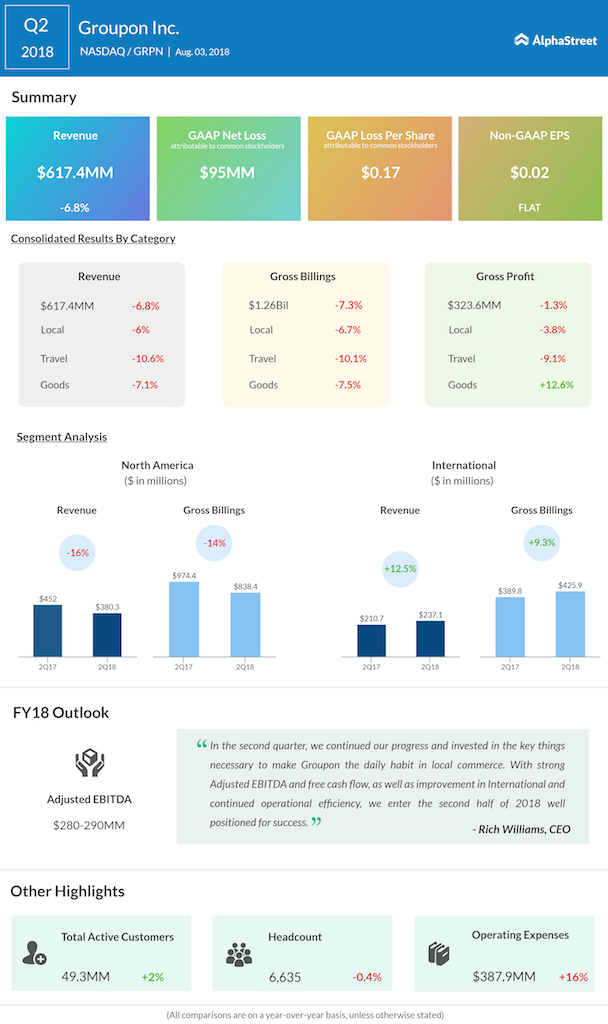 Global units sold declined 10% to 40 million. Units in North America were down 14% with a significant portion of that decline was due to the focus on long-term gross profit optimization in goods as well as continued scaling of Groupon Plus, a cash-back restaurant deal, and the sale of certain OrderUp assets that occurred in the second half of 2017.

For the full year 2018, Groupon continues to expect adjusted EBITDA to be $280-290 million. Excluding amounts that might be paid related to the IBM litigation, the company anticipates generating free cash flow of approximately $200 million. On July 17, IBM won the internet patent battle against Groupon and the former was awarded $82.5 million by a federal jury.

RELATED: Groupon may soon find a deal for itself

Ever since the deals website went public in 2011, it has struggled to woo investors, especially in terms of revenue growth. Many blamed Groupon’s flawed business model. Recently, there were rumors that the company is looking for a prospective buyer and has held preliminary talks with more than one potential buyer so far. Industry watchers guess that the list includes major companies like Alibaba (BABA), which had picked 6% stake in the company in 2016, Alphabet (GOOGL), Amazon (AMZN), Apple (AAPL) as well as IAC, who’s CEO Joey Levin sits on Groupon’s board.