Groupon (NASDAQ: GRPN) reported non-GAAP income per share of $0.01 per share on revenue of $532.6 million for the second quarter of 2019. Wall Street estimated Groupon’s earnings to be $0.02 per share and revenue to be $565.69 million. After missing the bottom and topline estimates, Groupon stock was down 3% in the extended trading hours. 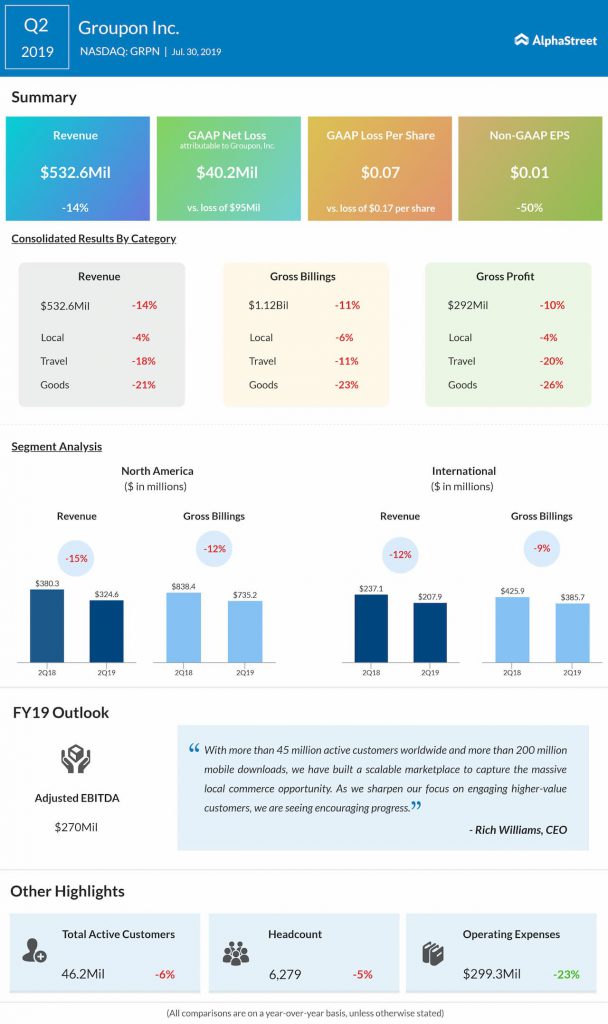 For the full-year 2019, Groupon reiterated its adjusted EBITDA outlook of approximately $270 million.

“With more than 45 million active customers worldwide and more than 200 million mobile downloads, we have built a scalable marketplace to capture the massive local commerce opportunity. As we sharpen our focus on engaging higher-value customers, we are seeing encouraging progress,” said CEO Rich Williams.

In a letter to stockholders, the daily deal website operator said that it continues to see traffic headwinds, including email and SEO, and is taking actions to buffer them.

North America gross profit decreased 9% to $198.6 million in the June quarter, primarily due to fewer customers and lower traffic, including email and SEO traffic. International gross profit decreased 10% to $93.5 million, hurt by the lower gross profit in Goods category driven by weak consumer sentiment in Europe, especially in the UK, and intensifying competition.

Read: Weakness in Financial Services and Healthcare segments likely to continue for Cognizant in Q2

Global units sold were down 12% to 35.3 million in the recently ended quarter. Units in North America were down 18% and International units were up 1%.

Compared to the negative return of 29% in the past 12 months period, Groupon stock had gained 6% since the beginning of 2019.