Guess which is the fastest-growing smartphone market… (Hint: Not China!)

Over the past few years, we have witnessed a rampant expansion of the smartphone market throughout the world, almost reaching a threshold in numerous regions including the US. But there is still one tech-hungry region that poses another opportunity for the fast growth of smartphone companies. Of course, industry leaders Apple (AAPL) and Samsung are aware of this, and are all set to make their Midas touch.

The market we are talking about is Latin America with a population of over 650 million, according to GSMA Intelligence. The findings are backed by the fact that some of the top countries where people spend more time on the internet – such as Argentina, Mexico and Brazil – are also in this region. 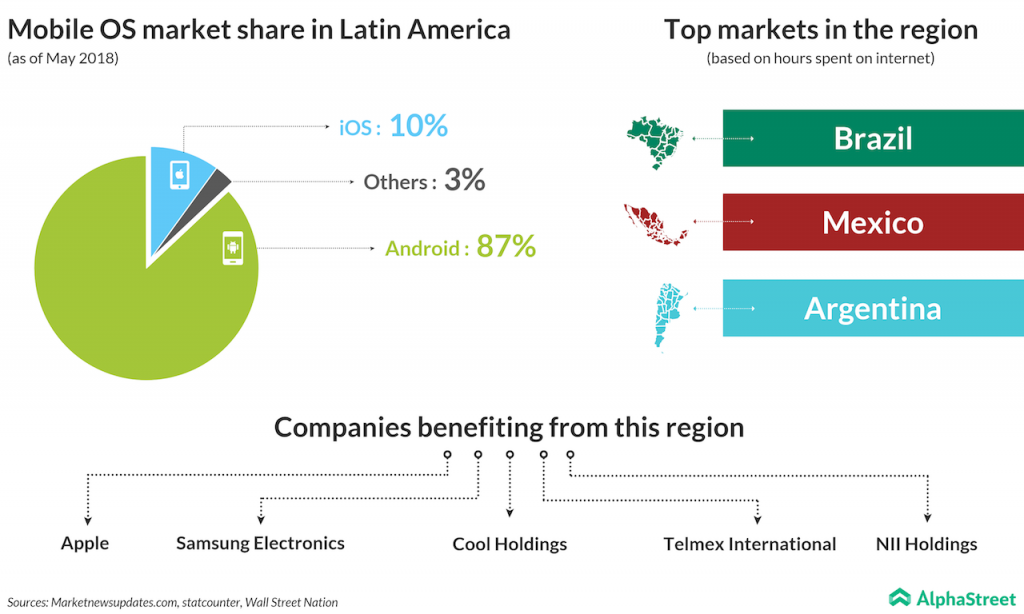 The growth in smartphone usage has been pretty evident here. According to Wall Street Nation, currently, about six out of every 10 mobile connections taken in this region are on smartphones. This is compared to less than one out of 10, six years ago. A plethora of factors, including economic improvements, a growing young population as well as more accessibility to various online services are expected to spur smartphone growth further here in the coming years.

Samsung Electronics has been at the forefront of conquering this market and at present, it holds a dominant position in as many as six countries including Peru, Argentina, Brazil, Colombia, Chile and Mexico. Apple, meanwhile, has recently been aggressively pushing its products in this region, and some of it is actually bearing fruit. The Wharton School has recently stated that iPhone devices are seeing a higher growth in Latin America, compared to its rival brands. In fact, Apple is likely to open a flagship store in Mexico City by next year.

Apart from these giants, a couple of smaller companies also have their focus fixed on Latin America. These include Cool Holdings (IFON), smartphone firm Transsion Holdings and China Mobile Games & Entertainment. We are sure there’s more coming up.