Harley-Davidson (HOG) reported second quarter earnings that beat Wall Street estimates for the sixth straight quarter, aided by growth in overseas sales. Earnings came in at $1.45 a share, above analysts’ estimate of $1.42 per share. Revenue fell 3.3% to $1.53 billion, beating market consensus of $1.43 billion. The decrease was mainly due to lower shipments, costs associated with manufacturing optimization initiative and higher operating expenses.

The Q2 earnings come just weeks after the iconic bike manufacturer decided to shift its production for the EU market from the US to other international facilities (such as India, Australia, Brazil, or Thailand) in order to avoid heavy tariffs.

EU had hiked tariffs on motorcycles exported from the US to 31% from 6%, effective June 22, 2018. In response to Trump’s tariffs on EU steel and aluminium, the management was forced to make this move as Europe is the second-largest market for the company. This decision of Harley received sharp criticism from the POTUS. 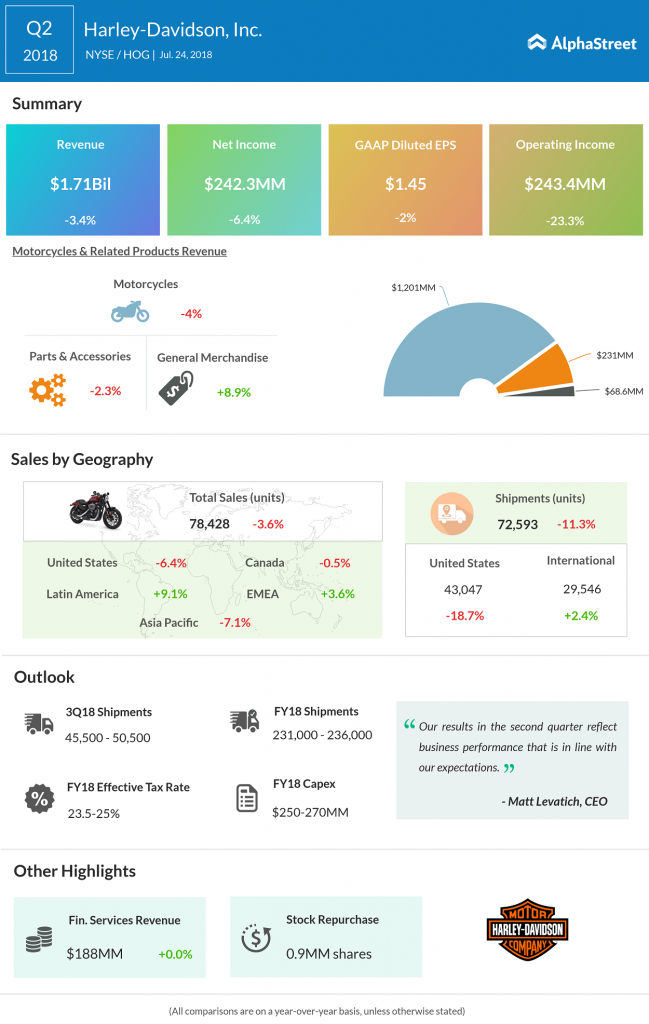 The Wisconsin-based company was already grappling with low sales and Trump’s tariffs have made the company vulnerable on several fronts. Harley even plans to close down its manufacturing plant in Kansas City that has around 800 workers. Meanwhile, it plans to open an assembly plant in Thailand.

The company said it expects to incur restructuring and other consolidation costs of $170- 200 million and capital investment of approx $75 million through 2019. During the quarter, costs related to the manufacturing optimization were $14.8 million.

Related: Trade war forces Harley-Davidson to shift production from the US

To deliver sustainable growth in the future, the company has set out a strategy. The objectives for the 2027 strategy includes building 2 million new riders in the US, growing its international business to 50% of annual volume, launching 100 new high impact motorcycles and doing so profitably and sustainably.