Despite the drop in second quarter revenue and earnings compared to the last year numbers, Hasbro’s (HAS) results beat analyst expectations, sending the stock climbing more than 8% in pre-market trade. Reported revenues dropped 7% to $904.5 million for the second quarter of 2018. The quarterly revenues were impacted by the liquidation of Toys R Us in the US and several other global markets. Revenues also declined internationally mainly due to retail inventory management and changes in the retail landscape.

“2018 is unfolding as expected as our teams manage the liquidation of Toys R Us in many markets and address the rapidly evolving European retail landscape,” said CEO Brian Goldner. He further added, “We are investing in our business – in innovation, entertainment and a modern global commercial organization, to drive profitable growth in 2019 and beyond.” 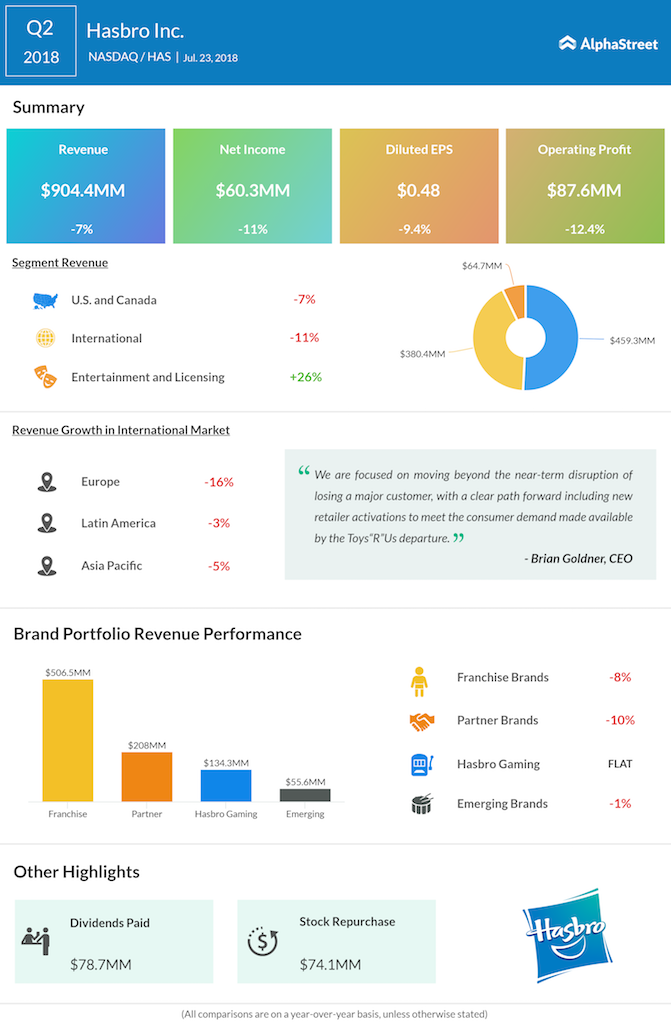 During the quarter, US and Canada net revenues decreased 7%, hurt by Toys R Us revenue loss and stores liquidation. International revenues fell 11%, negatively impacted by efforts to clear excess inventory in Europe along with the loss of Toys R Us revenues in several European and Asia-Pacific markets. Entertainment and Licensing segment revenues grew 26% helped by success in the licensing and entertainment businesses.

Franchise Brand revenues grew in the Entertainment and Licensing segment despite seeing declines in the other two segments. Partner Brand revenues also dropped in the US and Canada as well as the International segments. Hasbro’s total gaming category saw a growth of 14% during the quarter. Emerging Brands saw revenue growth in the International segment while in the other two segments, it posted declines.

Last month, Hasbro acquired Power Rangers and other Entertainment assets from Saban Properties for $522 million. The company stated that the acquisition of Power Rangers helped strengthen its brand portfolio. Hasbro’s product portfolio and its investments in gaming are likely to push revenue and growth but the company continues to face challenges from shifts in the US retail environment.