Shares of the fabless semiconductor company, Himax Technologies (HIMX), fell 2% during the pre-market trading after its revenue missed analysts estimates. During the second quarter, the company’s revenue increased 19.5% on a year-over-year basis to $181.4 million. Analysts were expecting the company to report revenues of $183.1 million.

The rise in revenue was mainly due to the contribution from Himax’s small and medium-sized display drivers that posted over 27% increase in its revenues to $89.3 million.

During the quarter, revenue from large display drivers was $60.6 million, up 16.3% year-over-year. This was mainly driven by increasing 4K TV penetration and more number of Chinese customers using the new LCD fabs. Large panel driver ICs accounted for 33.4% of the company’s total revenues in Q2. Driver IC revenue for automotive applications rose over 35% year-over-year. 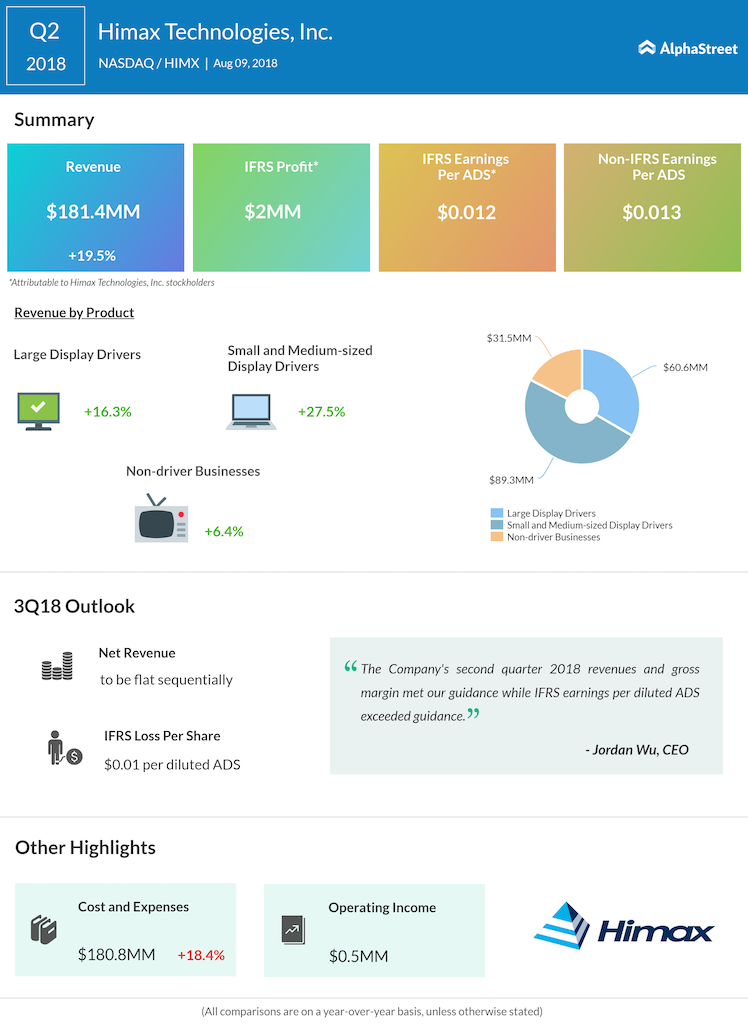 “Looking into the third quarter, we expect our large display driver IC business will grow sequentially benefiting from Chinese panel customers’ capacity expansion and the ramping of new fabs. Our small and medium-sized business is likely to decline as our growth in the automotive segment will be offset by the significant decline of smartphone sales, “ said Jordan Wu, CEO.

The Taiwan-based company reported a profit of $0.012 a share, compared to a loss of $0.004 a share during the prior year period.

As of June 30, 2018, Himax had 172.1 million ADS outstanding, unchanged from last quarter. On a fully diluted basis, the total ADS outstanding are 172.5 million.

For the third quarter, the company expects revenue to be flat sequentially and a loss of $0.01 cent per diluted ADS. Non-IFRS EPS is expected to be around 1.5 cents per share.