The Atlanta, Georgia-based company, which recently acquired The Company Store, an online and catalog giant, witnessed a 7.5% rise in its sales to $23.9 billion, beating analysts’ estimate of 6.5%.  The retailer reported a whopping 7.5% increase in its comparable sales. It also crushed earnings, reporting $1.52 per diluted share, a 5.6% increase from the same period in the prior year. Customer transactions during the quarter also rose 2%.

The retailer reported a whopping 7.5% increase in its comparable sales.

When compared to its rival Lowe, Home Depot has been enjoying more the recovery of the housing market. Homebuilding has grown to more than a one-year high in January. According to the Commerce Departments, housing starts rose 9.7%, highest level noted since October 2016. The retailer also benefited by the impact of hurricanes that hit the Southern US as well as from the reconstruction efforts from the other natural disasters that took place around the same time. 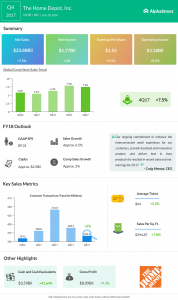 Home Depot is said to be one of the generous retailers as it aims to give back over 50% of its earnings to its shareholders. It has regularly been updating its dividend during its fourth-quarter earnings report, and as expected, the retailer revealed a significant 15.7% dividend boost this quarter to $1.03 per share.  The board has increased the dividend for the ninth consecutive year.

And Home Depot is making a serious start of spring sales as it plans to bring on board over 80,000 new workers nationwide.