Analyst firm Gartner Tuesday released its report on global smartphone sales in Q2, which showed that Chinese companies are increasingly putting pressure on leading tech giants Samsung and Apple (AAPL). In a notable achievement, Huawei outstripped Apple to be the No. 2 smartphone vendor in the world, riding on the success of its Honor lineup and premium model P20 Pro.

While Samsung continued to be the leading smartphone OEM with a global market share of 19.3% in the second quarter, it was evident that the Chinese firms were creating a dent in its figures. During the same quarter last year, the Korean smartphone giant had a market share of 22.6%.

Meanwhile, Apple’s market share saw a slight dip to 11.9% from 12.1% in the year-ago period as sales remained relatively flat. It may be noted that Q2 is Apple’s slowest quarter, as iPhone fans await the grand September launch event.

However, Huawei probably took full advantage of this slowdown, raising its global market share during this period to 13.3% from just 9.8% a year ago. Huawei’s unit sales jumped 38.5% during the second quarter.

Adding to the Chinese assault was Xiaomi, whose market share rose from 5.8% to 8.8%. In a striking first-time achievement, both the Chinese smartphone companies together sold more devices than Samsung during the quarter. 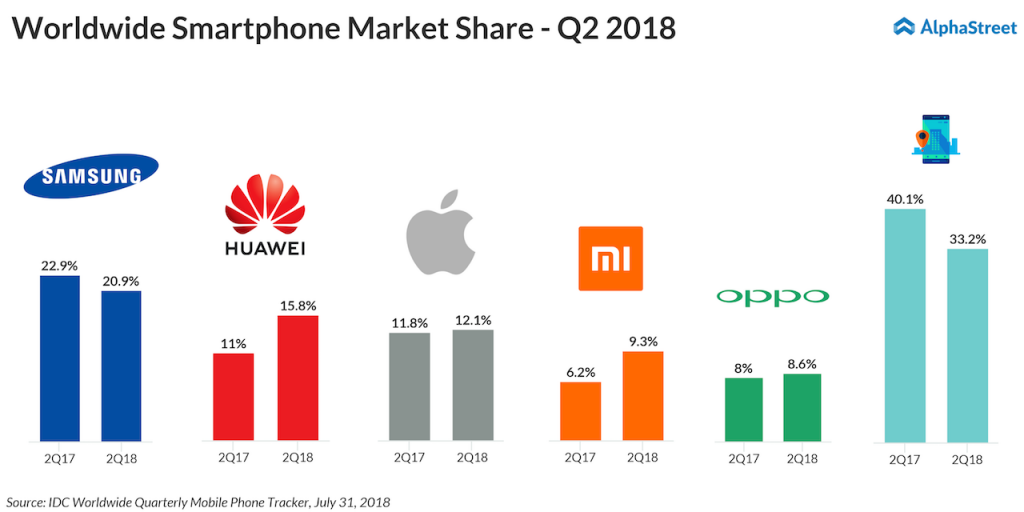 Reports back the figures published a month ago by IDC and Canalys, both of which reported the same order of ranking, albeit slight changes in the data.