Tech giant International Business Machines (NYSE: IBM) will be reporting its first quarter 2019 earnings results on Tuesday, April 16, after market close. Analysts expect the company’s earnings and revenue to decline about 3% and 9%, respectively. On average, analysts target IBM to post earnings of $2.22 per share on revenue of $18.51 billion. IBM stock opened flat when market opened today and was down about 1% during the midday. 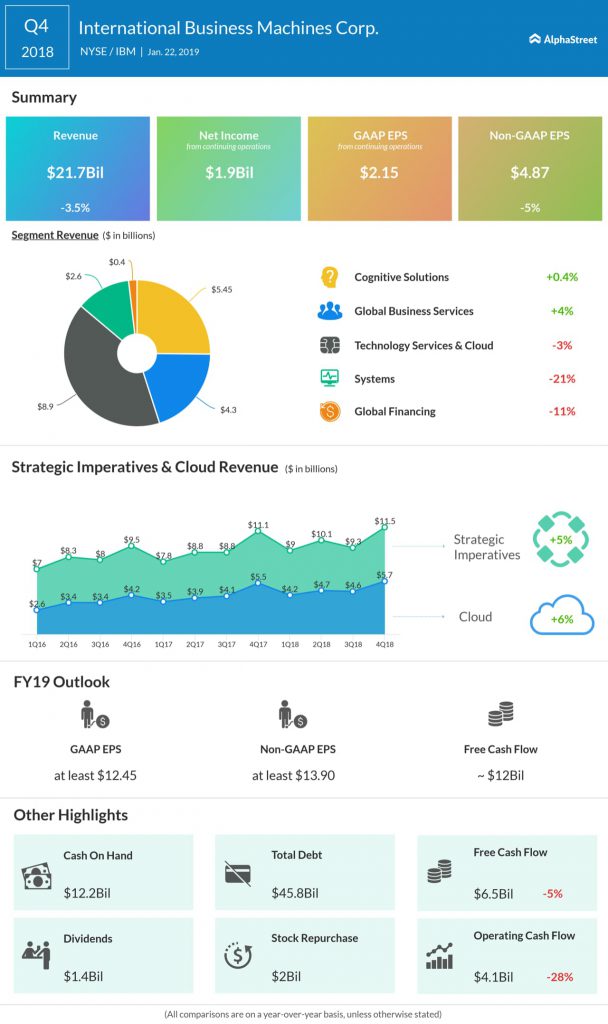 Systems revenue decreased 20% in the fourth quarter with a revenue deline of 44% in Mainframes. Storage Hardware revenue decreased as the storage market remained competitive with pressure in pricing. The company’s open hybrid multi-cloud approach gained momentum in the final quarter of 2018.

For full-year 2019, IBM targets adjusted operating earnings to be $13.90 per share and unadjusted earnings of $12.45 per share. Cash flow is touted to be about $12 billion for the year.

IBM’s focus on hybrid cloud and its acquisition of Red Hat (RHT) are likely to contribute to IBM’s results in the future. However, IBM has been criticized for buying Red Hat for $34 billion and investors would closely watch IBM’s progress in this deal. Red Hat acquisition is expected to close in the second half of 2019.

Shares of IBM have gained 26% since the beginning of this year and dropped 8% in the last 12 months. Majority of the analysts had recommended to “Hold” the stock.