Revenue jumped 45% to $669 million, with $34 million coming from bitcoin trading, and adjusted earnings of $0.06 per share improved a penny over the prior year period. However, net loss shot up to $24 million compared to $15 million loss in the prior year period. The increase in net loss was due to higher operating expenses, primarily on the marketing and product development front. The increase in loss is understandable as the company wants to beef up the investments as it expands its wings globally. This move is expected to augur well to its top line, but impact profits in the near term.

On an adjusted basis, revenue surged 51% to $307 million, and Bitcoin revenues were $200,000 for the quarter. Margins decreased 1% over prior year and 3% sequentially to 12%, due to increased investments. 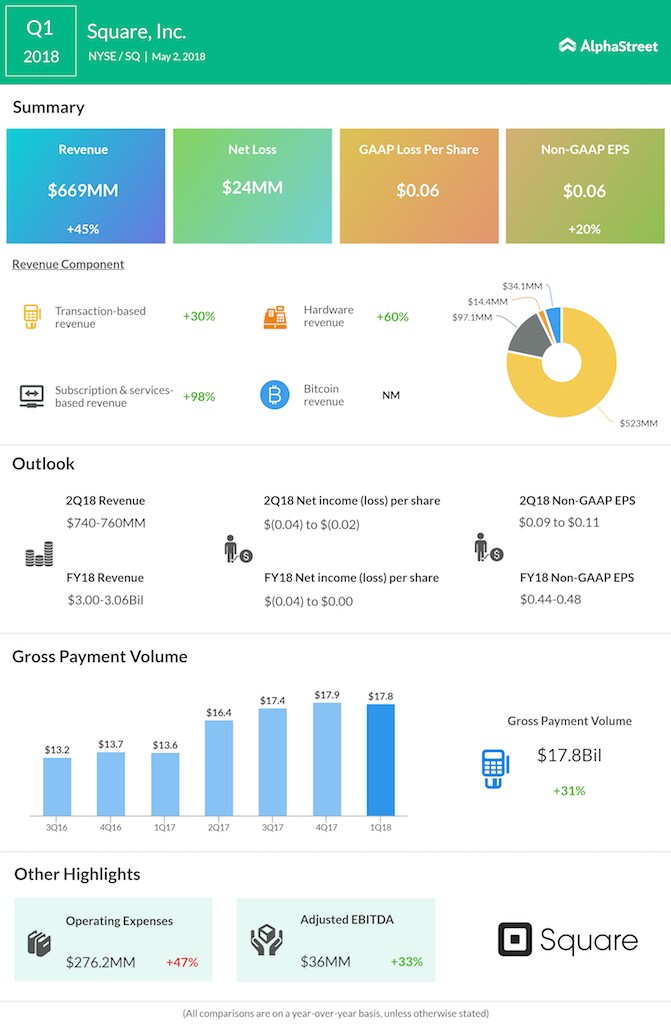 Last week, Square acquired website building firm Weebly for $365 million. The acquisition will help Square to reduce its dependence on physical stores and expand its footprint on the ecommerce side. The company expects to integrate Weebly’s offerings with Square, which would help to offer “omnichannel commerce” solutions to its clients. It’s worth noting that Weebly has more than 625,000 paid subscribers, of which 40% is outside the United States. This acquisition will help Square to expand its global footprint and thereby improve its top line. The company expects to close the deal in the second quarter.

Last year, Square applied for industrial loan company (ILC) license, which is still under the review of regulators. If Square gets the nod for ILC, it plans to offer loans and deposits to small businesses. There are 28 million small and medium businesses in the US. It’s a well-known fact that SMBs find it tough to get loans from banks. The payment company wants to serve this underserved market once it gets the charter license. Square currently partners with Celtic Bank, which is an ILC, to offer loans. If the company doesn’t get the ILC license, it would continue offering services in partnership with Celtic.

Square launched bitcoin trading facility in its Cash app in January. Currently, it’s not available in New York State, Georgia, Wyoming and Hawaii. Based on the first quarter results, revenues and earnings from bitcoin trading would continue to increase this year.

The payment processor has lifted the revenue guidance for 2018. Net revenues are expected to come in the range of $3 billion to $3.06 billion, while adjusted revenue is forecasted between $1.40 billion and $1.43 billion. Adjusted EPS is targeted between $0.44 and $0.48.

Square’s stock is up over 35% this year.