Newton’s laws of motion don’t apply to stock movements, although one wishes it did. A big bang occurred on May 21, 2015, when Shopify (SHOP) started trading on NYSE at $28 per share. The reverberations of this successful IPO haven’t dampened till date, thanks to some fodder in the form of market-beating results. Stocks rallied like there was no external force acting on it. However, we now feel the success is going to bite back soon. This stock is overbought.

While we still appreciate the idea behind the business as well as the 750% stock rally since IPO, the over-enthusiasm in the market is likely to cost the company some of its stock value pretty soon. The stock has hit a point from where growth would be difficult, if not highly risky.

Take, for example, the target prices set by analysts. Shopify is currently trading a little higher than the consensus target price. This makes no sense, given the liberal optimism often displayed by analysts. In a typical scenario, analysts would have raised the target price to reflect the growth displayed by the stock, but they apparently haven’t in this case. One can safely infer that analysts doubt any more growth is possible for this stock solely based on optimism. 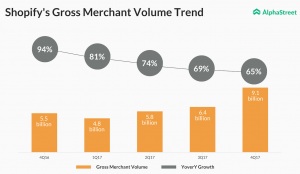 Despite the company making baby steps to becoming a profitable entity, even investors who spoke highly of this stock seem to have started noticing the dark spot — the gross merchant volume (GMV). A slowing GMV, or the amount generated by users, is proof that fewer merchants are being added to its client-base than it used to. This metric stole the sheen off its latest fourth-quarter results, which would otherwise have deeply elated investors. Though GMV rose 65% year-over-year to $9.1 billion, this was slower than the 69% jump it achieved in the prior sequential quarter.

The stock has hit a point from where growth would be difficult, if not highly risky.

On March 5, Shopify announced the retirement of its much-loved CFO Russ Jones, who had overseen the company’s transition from a start-up to a public-listed giant. Though Russ will continue as a strategic advisor for an unknown period, and despite the fact that the upcoming CFO Amy Shapero has significant experience leading SaaS companies, Russ’s absence will show up in the investor sentiments.

We would clarify here that Shopify is a company with high growth potential, especially given its plans to expand operations to Japan, Singapore, France, and Germany. However, at this point, further growth would be seen as abnormal. If you are planning to tap into this high-growth stock, we wouldn’t recommend it at the moment. For investors who are currently holding the stock, now may give the right time to make a move.