Software services company Infosys (INFY) reported a marginal decline in its earnings for the first quarter of 2019, missing the consensus estimates, while revenue numbers met expectations. Profit for the quarter came in at $534 million, down 1.2% year-over-year. However, profit on a per share basis, grew 3.9% to $0.25 per share. Net profit included an impact of $39 million for the reduction in the fair value of assets held for sale.

Revenue grew 6.8% to $2.83 million for the quarter, driven by growth in the company’s digital business offerings and higher deal wins in Q1. On a geographic basis, Europe and Rest of World posted marginal growth in revenue, while North America and India posted declines.

The Bengaluru, India based software giant also said that its deal wins crossed $1 billion, of which over 40% were from Financial Services. 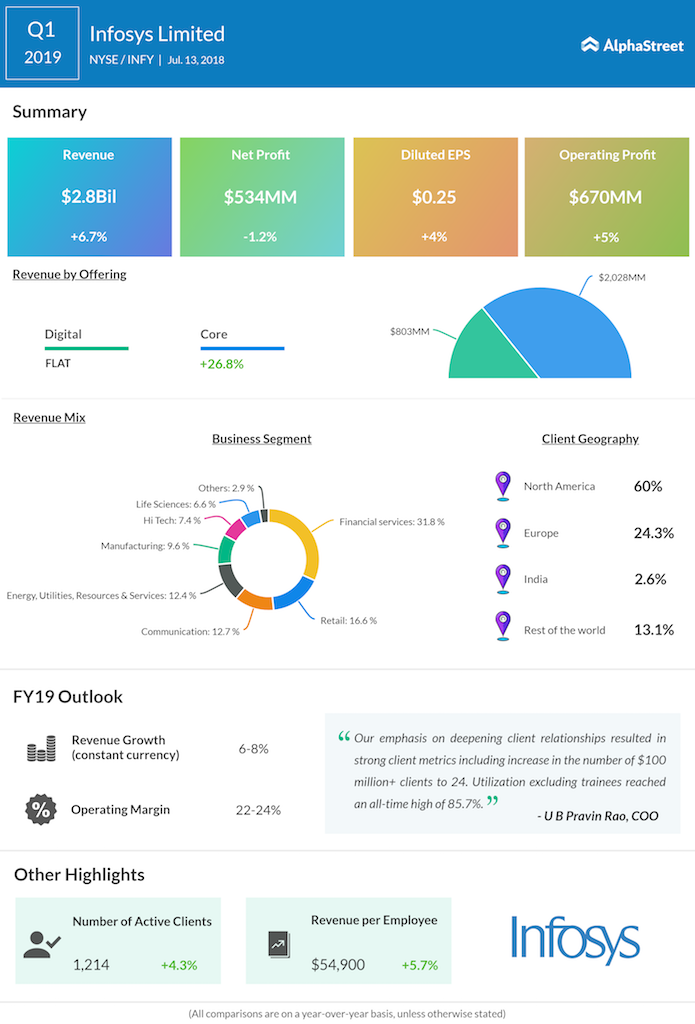 Additionally, the company’s Board appointed Michael Gibbs as an Independent Director effective today for a period of three years, based on the recommendation of the Nomination and Remuneration Committee of the Board.

Infosys board also today issued a 1:1 bonus of equity shares and a 1:1 stock dividend of American depository shares. The company said the bonus shares were issued to celebrate the 25th year of its public listing in India and to increase the liquidity of its shares further.

For the fiscal year 2019, Infosys retained its revenue guidance in constant currency at 6% to 8% and operating margin guidance was retained at 22% to 24%.

Post the earnings announcement, Infosys stock slumped more than 4% pre-market trading, while the stock had a stellar run during the past one year, jumping more than 30%. 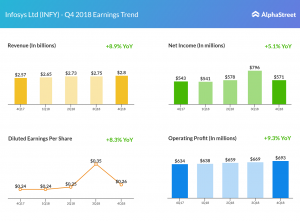