JetBlue earnings preview: Will quarterly numbers act as a tailwind?

JetBlue Airways Corporation (JBLU) will report its earnings results for the second quarter of 2018 on July 24. For the first quarter of 2018, the company reported a 9% growth in revenues and a 7% improvement in earnings. Unit revenue, which is a key metric, rose 6% last quarter.

Rising fuel prices had pushed fuel-related expenses 29% higher last quarter and it is expected to have an impact on the company’s profits in the second quarter too. JetBlue expects fuel cost per gallon to come in the range of $2.28 and $2.30. This, combined with an increase in other costs, is likely to impact earnings.

JetBlue expects second quarter revenue per available seat mile (RASM) to decrease around 1.2% year-over-year. This includes a 2.5 point headwind from holiday placement and a 1.25 point headwind from completion factor and co-brand incentive payments. This decline in RASM could hurt the company’s performance. However, the airline might see some benefits from lower taxes, which could help its earnings.

JetBlue announced that it is planning a corporate restructuring along with job cuts in order to reduce expenses. Although the company did not specify how many positions would be eliminated, it is said that the cuts will not impact flight crews. The airline plans to reduce several positions through layoffs and voluntary buyouts. This decision is part of its efforts to deal with high fuel and other costs.

JetBlue’s founder David Neeleman has teamed up with other investors to launch a new airline in the US named Moxy. The group ordered 60 jets worth $5.4 billion from Airbus earlier this week. JetBlue is also said to be planning a fleet transition in 2020, which is expected to increase unit costs in the short-term but the savings over the long-term are projected to be substantial. 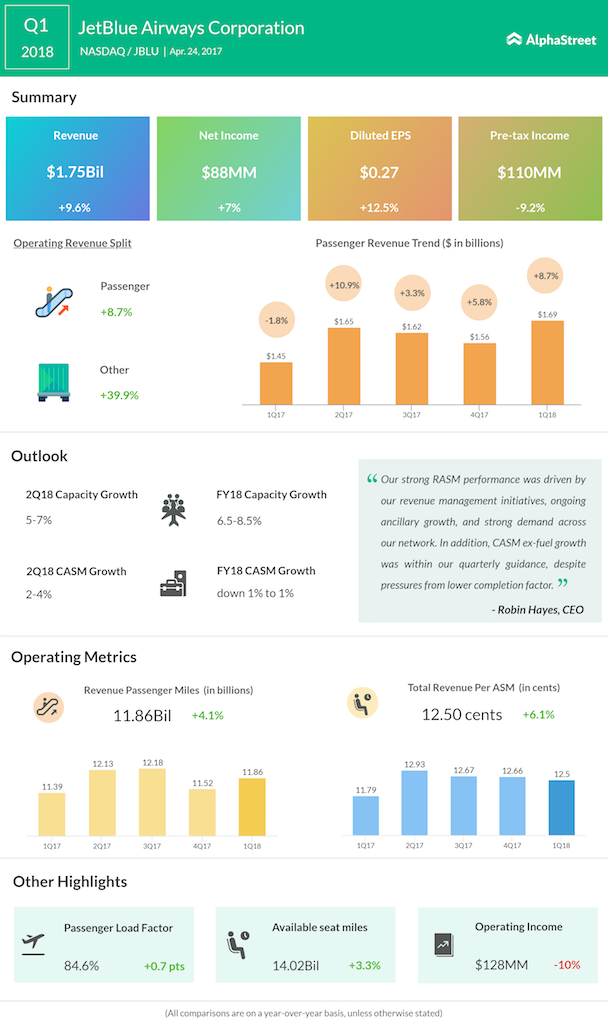