Keep a ‘smart watch’ on Fitbit

Fitbit, which had a successful IPO in 2015, has seen its own share of ups and downs, including some wide swings. In the two years after the IPO, the company saw its own products losing market share to activity trackers and smartwatches made by rivals including Apple, Garmin, and Samsung. 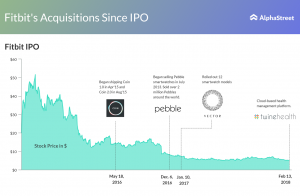 The culmination was with the recent drop to an all-time low after it reported its fifth consecutive decline in quarterly revenues. The only difference was that the decline was cut down to a mere 0.5%, rather than the usual double digits. This improvement, however, did not satisfy investors.

The consumer shift towards smartwatches had prompted Fitbit to purchase Pebble for $23 million. However, its long-awaited entry into the smartwatch market with the flagship product – Ionic — proved to be futile, further haunting its sales.

Yet, CEO James Park feels that its entry into the smartwatch category will help maintain the brand status.  The company is not depending solely on Ionic for this. Latest rumors suggest that Fitbit is working on a follow-up of its Fitbit Blaze smartwatch, which the company plans to introduce this year.  In the latest quarter, Ionic coupled with other new devices represented 36% of total revenue.

Fitbit has also expanded its digital health footprint by acquiring cloud-based healthcare platform Twine Health, with an intention of making its wearables more useful to customers. Fitbit is hoping to lock in more users with these new acquisitions.

Despite the decline in revenues and change in business model, the company has not really been burning too much cash. With absolutely zero debt and around $679 million in cash, the company demonstrates great financial stability.

Adding to this optimism is the recent research from IDC, which predicts that the wearables market is expected to multiply to 222.3 million units by 2021. Being a pioneer in the wearables segment, the strength of the market will have its effect on Fitbit as well. The company’s user community also grew by over 25 million last year. All Fitbit has to do is, keep innovating and launching better products.