In the fourth quarter, revenues increased as a weakness in the energy business was more than offset by growth in other segments

For General Electric Company (NYSE: GE), the last decade was a period of uncertainty. The engineering conglomerate embarked on a reorganization drive some time ago, with a focus on splitting into three independent companies. In a sign that the restructuring efforts are paying off, the company improved its margins constantly and delivered record earnings in the most recent quarter.

GE ended 2022 on an upbeat note, delivering strong margin growth and cash flows in the fourth quarter. The business has become leaner after the GE Healthcare spin-off and is expected to become more agile once the energy business is separated, which is expected early next year.

In the final three months of fiscal 2022, revenues rose 7% to $21.8 billion and topped expectations. The growth was driven primarily by the robust demand for jet engines and power equipment. That more than offset weakness in the company’s renewable energy division, which prompted the management to issue a cautious earnings guidance for fiscal 2023. While forecasting continued free-cash-flow growth for the year, GE executives warned that the energy division would have an operating loss of up to $600 million. Going forward, GE Aerospace will continue to be the primary growth driver. 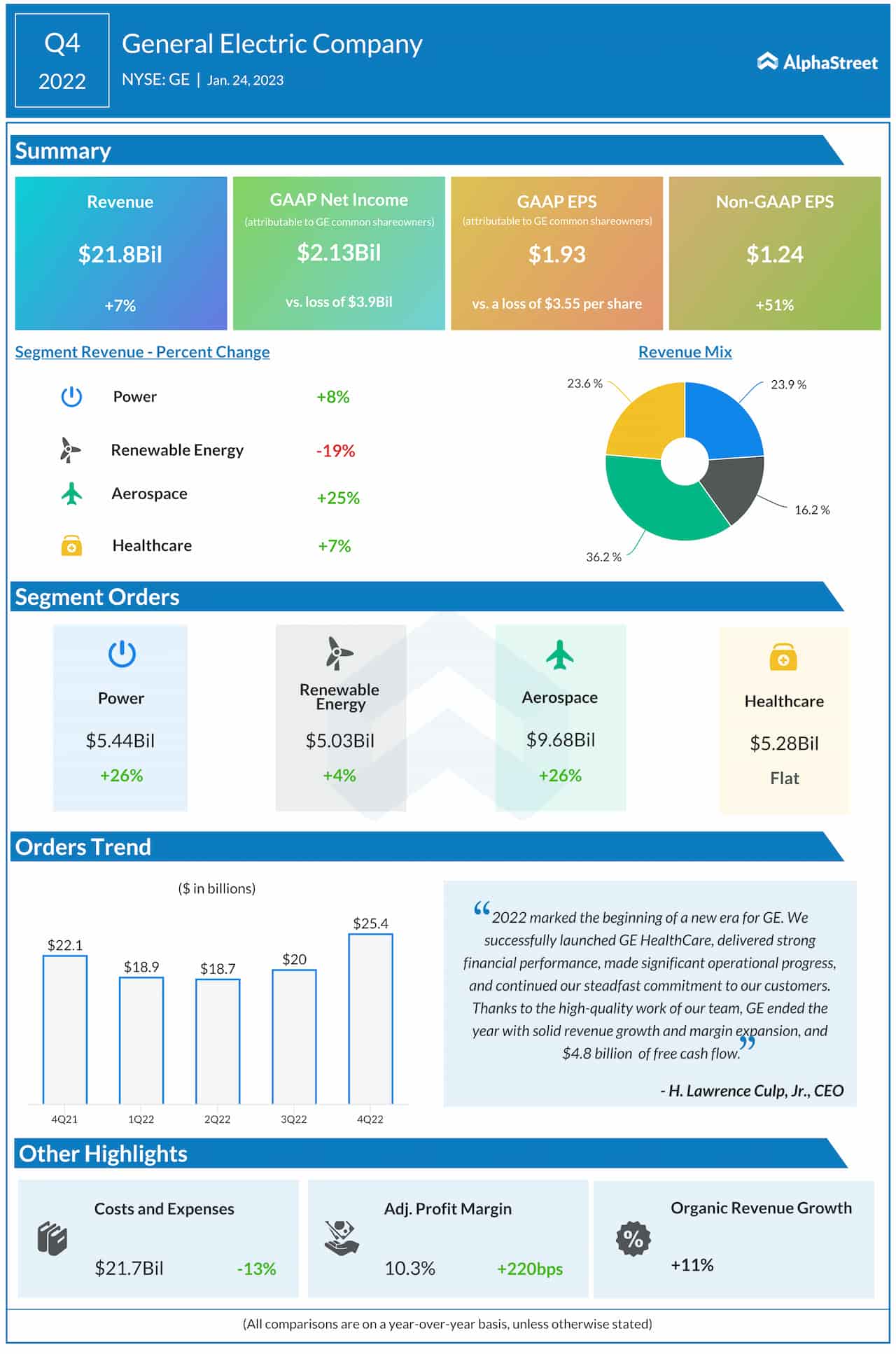 Lawrence Culp, chief executive officer of GE, said at the earnings call, “across the businesses, orders and sales pricing continue to improve with our selectivity strategy yielding a more profitable backlog and pipeline. Service orders and revenues, excluding repower, grew. There’s certainly more work to do and the next six months will remain challenging, but we’re acting with urgency. In 2023 we expect mid-single-digit growth, significantly better profit, and flat to improving free cash flow.”

Fourth-quarter adjusted profit jumped 51% from last year to $1.24 per share. On a reported basis, the bottom line bounced back to earnings of $1.93 per share from last year’s $3.55/share loss. Interestingly, earnings beat estimates more frequently in the last couple of years than earlier. Continuing the ongoing recovery, new orders rose at a faster pace during the quarter.

Reflecting the positive investor sentiment, GE’s shares made steady gains since the beginning of the year and maintained the uptrend after the earnings release. The stock, which has grown about 68% in the past fourth months, traded higher throughout Wednesday’s session, hovering slightly above its 52-week average.

The stock has become a lot more attractive than it was in the recent past, and the current valuation offers a safe entry point to those looking to invest. At the same time, the bullish outlook brings cheer to long-term shareholders who have been patiently waiting for returns.